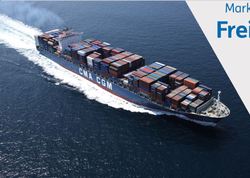 Carriers still hold all the cards in both spot and contract rate setting. Few options appear open to hard-pressed shippers.

CONTAINER freight spot rates to Europe ex-Asia have continued their relentless rise, with rates now closing in on $6,000 per teu for Shanghai-northern Europe volumes.

For the third week in a row, freight rates on the spot market to both northern Europe and the Mediterranean reported by the Shanghai Shipping Exchange have sat at over $10,000 per feu, and the 4.2% and 5.2% increases, respectively, will put yet more pressure on shippers.

The Shanghai Containerised Freight Index rose another 1.8% this week as a decline in transpacific rates to the US west coast mitigated rises elsewhere.

Drewry’s World Container Index also saw a 2%, or $121 increase this week and now stands at nearly 300% above where it was this time in the past year.

It is not just spot prices that are seeing strong increases, however.

Xeneta’s Long-Term XSI Public Indices now stands 34.5% higher than it did at the start of 2021, after rising another 9% in May.

All major trade corridors have seen rates growth, “and much of it spectacular” across the first five months, with Far East export and European imports leading the way — both up by more than 50%.

Xeneta chief executive Patrik Berglund said it was a development that “delivers pain and profit in equal measure” to those on opposing sides of the carrier-shipper divide.

“Every month we see a new set of results from the carriers demonstrating their strength,” he said.

“After years of fluctuating fortunes, the carriers are determined to seize on current opportunity, maneuvering to exploit huge consumer demand and increased online retail with new strategic moves.”

He cited German carrier Hapag-Lloyd’s plan to implement a $3,000 per feu general rate increase on Asia-US trades from mid-June.

“With fundamentals so much in their favour, there is a good chance they will achieve some level of implementation,” Mr Berglund said.

But the lack of equipment and port congestion had squeezed supply chains, leaving shippers stressed and facing increasingly one-sided negotiations.

“Even when contracts are signed, there is the potential of rolled cargoes and broken agreements as operators take advantage of massively lucrative spot rates,” he said.

“It is difficult to see the prospect of any immediate rates relief on the horizon.”

That would likely not happen until the pandemic had further eased and more equipment and capacity became available, he added. In the short term, carriers would continue to hold the cards.

“It will be interesting to see how the market reacts to try and redress the balance, with the recent arrival of CULines — supported by purchasing association XSTAFF — showing the potential for alternative solutions to the main carriers,” he said.

Intra-Asia operator CULines started doing ad hoc sailings to Europe earlier this year but from June will boost its monthly service to a two-week service to Antwerp, Rotterdam and Hamburg, using 4,200 teu vessels.

“Under pre-pandemic market circumstances it would not be economically feasible to compete against 20,000 teu vessels with 4,200 teu vessels,” said Vespucci Maritime chief executive Lars Jensen.

“CULines provides an example of just how extreme the current market is.”