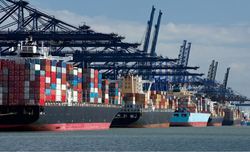 Institutional investors advised by JP Morgan Asset Management UK are reported to be behind an order for 15,000 teu containerships that are not linked to a charter commitment.

Hyundai Heavy Industries has landed the deal, thought to be worth around $500m, as investors see long-term potential for container shipping that is finally producing strong profits after years of under-performance.

SPECULATIVE interest appears to be making a comeback in the container shipping market, with investors placing an order for four 15,000 teu vessels without the backing of charter commitments.

JP Morgan declined to comment on the market reports.

Delivery dates for the quartet are between late 2023 and early 2024, and design specifications are thought to include an option on choice of fuel and propulsion systems.

In recent years, most containerships have only been ordered in conjunction with a long-term charter contract so as to guarantee employment and steady revenue streams for the first 10 or 15 years. Speculative ordering by mostly German owners in the past was widely blamed for the severe over-supply of capacity that blighted the industry for many years.

However, with such strong market conditions right now and a healthy outlook, container shipping is starting to attract financial investors.

Furthermore, 15,000 teu-class ships are regarded in industry circles as a relatively safe bet, given their flexibility and suitability in numerous trade lanes. Seaspan and Zodiac Maritime are among the owners that have ordered 15,000 teu tonnage in recent months.

Despite more newbuilding activity, the size of the global orderbook remains relatively low at around 11% of existing capacity, compared with the peak of more than 60% prior to the 2008/09 financial crash.

JP Morgan Asset Management UK is believed to advise on a very large shipping portfolio that includes a variety of vessel types.

The US banking group does not invest directly in shipping assets but advises institutional investors.

The reported price for the 15,000 teu newbuildings of around $120m apiece compares with closer to $106m late last year, according to Clarkson Research. However, some recent orders for this size of ship are said to be in excess of $130m each.

Charter rates for containerships of all sizes have soared over the past months as lines scrambled for capacity to meet a surge in cargo demand that has created congestion along supply chains.

But there are still concerns that speculative orders risk being affected by uncertainty over both future fuels and the strength of the market.

“Ordering activity will in all likelihood be triggered by the container line companies, unlike the speculative orders of the past,” MPC Container Ships chief executive Constantin Baack said recently. “Add to that the technology question, which is still unanswered. If you are an owner, shipping is about managing the residual value risk.

“The value risk if you take a technology choice as an owner without a charter backing is significant. I would expect a lot of ordering to be backed by charters, and that is healthy,” said Mr Baack.

There are also questions over whether the current boom in container shipping will continue as the pandemic recedes and consumer spending returns to services.

Maersk ocean and logistics chief executive Vincent Clerc said that much of the growth in demand during the pandemic was based on government support to sustain consumption, and it was important to see how the pandemic would influence demand in the years to come.

“Market growth is significantly lower that what it has been in the past,” Mr Clerc said. “Looking at investment in new capacity with the same eyes as we had when expectations were for high growth doesn’t make sense.”