<![endif]--> Shipping will need to manage uncertainties as pandemic recedes 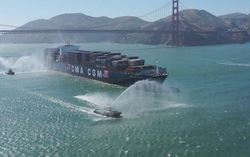 There has been ‘significant’ disruption in the ocean business in the past year, with ‘rocket-high rates’, a lack of reliability and a failure to load booked containers, says DB Schenker board member for air and ocean freight Thorsten Meinke.

CARRIERS, shippers, and forwarders continue to face uncertainties even as the economic outlook brightens as the effects of the coronavirus outbreak start to be brought under some control.

“Our expectations for this year base case economic scenario is positive,” said Rahul Kapoor, global head of commodity analytics and research at IHS Markit. “We are expecting the world economy to be gradually emerging from the pandemic.”

“That's still a very strong recovery in terms of the economic growth,” he told the Journal of Commerce TPM21 conference.

While the rebound depends on the speed and effectivity of the vaccines in controlling the health crisis, the US economy will move from recovery to expansion in the third quarter of 2021 with full employment likely to follow, he said.

Government stimulus efforts are meanwhile the key driver of growth, enabling consumer spending which will provide “a strong tailwind” for container demand going into 2021 and “the second half as well”.

“So, overall, we expect that consumer demand, consumer spending and continued demand to remain strong in 2021,” he said.

“The very active, agile, flexible management of capacity that we've seen over recent years gives us a lot of confidence that decision-making and thinking has actually changed, certainly for now,” he said.

“I think this is an area that does need to continue to be tested, but the swift reactions to, in particular, the distress of 2020 and the second quarter in particular shows us that the old mantra of vessels being there to be operated, the old approach, traditionally operating flat, almost utility-like networks has actually changed.”

He said the lines’ actions were based on profitability requirements and cashflow generation priorities.

“Those need to continue to be tested but taking the actions with capacity already situated in fleet, as well as the relative lack of vessel ordering activity over recent years, just give us some confidence that this situation is here to persist at least for some time longer.

“We've now seen year-on-year margin progression three years in a row for most liners and basically almost everybody. That shows you a building track record of managing margins in all types of scenarios.”

In terms of the ultimate end performance, Mr Glynn said there was “more discipline, more successful capacity management and greater levels of profitability management from the liner sector”.

He dismissed fleet expansion or even fleet modernisation in favour of improved technology.

“I think that digitisation is a more worthy focus for a lot of liners using cash to invest in better technology, better processes that can reduce costs that can increase revenues that can produce a stronger, maybe more reliable relationship with key partners in the supply chain,” he said.

As for the future, “management teams will be increasingly thoughtful about what they want, whether it’s the second half of 2021, or indeed 2022 or beyond, to look like”.

“They currently have the time to strategise and make some decisions around that, which has ramifications for costs as well as capex management. I think to the end-to-end strategy perspective, it buys time to get that right.”

He added: “This is a precious period that shouldn’t be wasted.”

Thorsten Meinke, DB Schenker board member for air and ocean freight, said there had been some “significant” disruption in the ocean business in the past year.

That had brought “rocket-high rates” and a lack of reliability in meeting schedules and even failure to load booked containers.

Mr Meinke does not see the volatility of the business changing much. Indeed, his advice is to embrace volatility as the new normal.

“Accept your volatility and the more volatility you have as a customer, the less predictability do you have, the more you should be ready for a voluntary rate,” he said. “I think that's how it's redefining the future.”

He noted that the lines are indeed making “good money now, but well, everybody's in business to make money”.

Mr Meinke said: “We are in the middle of a redefinition of who buys where. In the past, if you had a nice brand name and large volume, you always have been attractive to go to a carrier direct. What’s coming now is everyone, shippers and also the carriers, look [around] much more.”

He said the model is “moving away from buying the best rate to buying capacity” because the logistics cost are “irrelevant” for most commodities towards the total selling price.

Instead, “one or two per cent more could significantly improve the quality of availability of these products in the stores. And I think this is where it’s going to.”