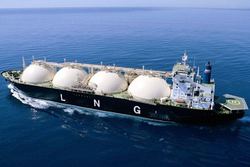 Pure liquefied natural gas shipping plays fail to see share prices rebounding to pre-pandemic levels and in line with seasonal hikes in shipping rates. Observers suggest this is a sign of investors buying into weaker prospects as more tonnage enters a slower market.

LNG trade is expected to grow only 4.5% next year and this does not bode well for about a dozen new tankers entering service without charters, according to Drewry.

THE prospect of a seasonal rally in liquefied natural gas spot rates being cut short by looming overcapacity and pandemic-linked demand concerns is pulling back pure LNG shipping stocks.

Spot shipping rates may have crossed $100,000 on the back of winter demand surge, but the performance of LNG stocks remained largely lacklustre, Drewry Maritime Financial Research’s assistant manager Santosh Gupta said in a published market opinion.

He suggested that Golar LNG and Gaslog with 13 and nine tankers being traded in the spot market in their respective fleets should stand to benefit from the rate surge, but their stock valuations do not appear to factor in such upside.

Nasdaq-listed Golar LNG lost 31 cents to close at $7.87 on November 6. Gaslog traded flat at $2.26 on the New York stock exchange.

They are a long way off from their 52-week highs of mid-to-high teens.

These stocks have not tracked further advances in spot shipping rates.

Rates of MEGI and XDF tonnage are hovering at $120,000, up from levels seen in October, according to Drewry.

Shipbrokerage Poten & Partners likewise pointed to 3% and 6% week-on-week increases in spot rates for trades in the West and the East as of Friday.

In Golar LNG’s case, investors may have also reacted to class action its shareholders are seeking to file, alleging damages arising from disclosure lapses on bribery charges brought against the now former chief executive of its gas-to-power subsidiary.

The consensus is however, that the broader shipping market has slowed following the pandemic and may well weaken heading into next year.

LNG trade is expected to grow only 4.5% next year and this does not bode well for new tonnage entering the market.

Forty-seven LNG carriers are due to be delivered in 2021 with a quarter uncommitted to charter contracts, Mr Gupta wrote.

The analytics arm of pricing agency, S&P Global Platts held the contrarian view that LNG market may still expand, albeit by less than 9m tonnes, to 363m tonnes this year.

But Platts also forecast only a short-lived peak this month for shipping rates, owing to a build-up of new tankers and relatively narrow inter-basin price spreads.