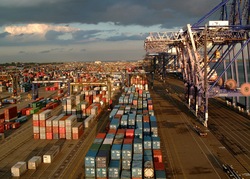 Main lane freight rates have taken their first step back from their run of record-breaking levels. Carriers will now be watching for how demand holds up following the Golden Week holiday.

Additional capacity coming into operation has provided a breather for shippers but spot rates remain near all-time highs.

A shortage of equipment in China has helped keep spot rates high.

THE rise in containerised spot rates slowed to a crawl this week, indicating that carriers may be approaching peak pricing on the main lane trades.

After breaking records for the past eight weeks with significant gains on many trades, the Shanghai Containerised Freight Index rose by less than 1% this week.

While the tiny slide will not be concerning carrier trade lane managers, it may mark the peak, at least for now, of the capacity driven surge in prices that has defined container shipping during the pandemic crisis.

Prices traditionally peak during August and September, driven by cargo owners stocking up ahead of the holiday shopping season at the end of the year, and begin to tail off again in October, when the Golden Week holiday in China sees production put on hold.

This year has, so far, been no different, being remarkable only in that it was initially thought that it would be different. In every previous economic crisis, falling demand has led to a collapse in rates.

But strict capacity management saw rates hold up when demand collapsed, and despite the economic storm clouds on the horizon, demand, particularly in the US, has remained stronger than expected.

This has been driven partially by inventory restocking, so may not last, but carriers have had their strongest peak season in years, in both volumes and rates.

While this has led to accusations of price gouging and investigations into whether lines are using tight capacity to artificially prop up the market, capacity is actually higher this year than last on the transpacific and lines have been restoring previously blanked sailings to meet the demand.

All eyes now, however, will be turning to what happens after Golden Week, with the expectation being that, having learned a valuable lesson, lines will maintain their discipline and remove tonnage again.

Whether current peak rates on the transpacific are sustainable long term remains to be seen. If demand does tail off significantly and economic conditions deteriorate, it would take a serious amount of capacity reduction to keep rates this buoyant.

Nevertheless, issues such as container imbalances, which have led to a shortage of available boxes in export markets, also play a role.

“We believe what we are witnessing is something beyond the usual dynamics of market supply and demand at work,” analysts at Drewry said. “The higher level of concentration in the ocean carrier industry, combined with new, tighter capacity management discipline among carriers are also behind these exceptional freight rate levels.

“Ocean carriers seem to have come to realise the opportunity presented by the coronavirus crisis and that by managing capacity closely, they can manage prices with potency.”

Shippers and forwarders should expect contract freight rates on most routes to increase in 2021, it said.