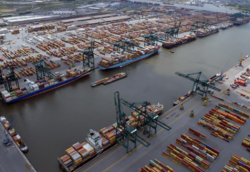 Container lines have managed the steep fall in demand during the pandemic with sharp capacity cuts. Those are now being reversed.

Activity this year has been subdued since the outbreak of the coronavirus pandemic, but last week the number of ship calls was down only 4% on the corresponding week in 2019.

THERE are increasing signs of confidence that demand on the major east-west trade lanes is improving, with container carriers reinstating a number of previously blanked sailings.

“This past week is the first week since the outbreak of the pandemic that we have seen carriers roll back — or un-blank — a significant number of scheduled blank sailings across both major trades,” said Sea-Intelligence chief executive Alan Murphy.

“The market situation has been steadily improving on the Transpacific, especially on the trade lane to North America west coast, but this optimism seems to now have been spreading to the Asia-northern Europe trade lane, which have seen six blank sailings for week 35-41 being rolled back in the past week, although the Asia-Mediterranean trade lane has seen third-quarter net blanked sailings increase by one in the past week.”

Sea-Intelligence analysis shows 21 sailings had been reinstated on the Asia-US west coast trade during weeks 28-31, leading to an increase in deployed capacity over 2019. Capacity on the Asia-Europe trade remains on a par with 2019.

“With fewer and fewer new blank sailings announcements in recent weeks, and a slight increase in re-instated blank sailings, it feels as if carriers are fairly satisfied with the amount of capacity that they are blanking in the third-quarter peak season,” it said.

The figures, which record port calls by containerships, general cargo