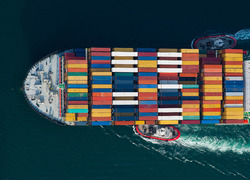 Freight rates on global indexes are soaring despite the pandemic. But at a regional level there are major challenges facing carriers.

With little sign of any upturn in volumes, aggressive capacity management steps are set to remain in place

Capacity reductions are set to stay in place as volumes remain low.

THE success of carriers in maintaining freight rates has not been achieved across the board and some trade lanes are showing signs of weakness as volumes continue to fall.

“It is clear, that from a global perspective, freight rates have increased significantly during the pandemic outbreak, and especially when measured against rate levels last year,” said analysts at Sea-Intelligence. “Furthermore, this has happened despite a decline in fuel prices, which under normal circumstances would add negative pressure on ocean rates.”

The transpacific headhaul and Europe-Asia backhaul, in particular, had seen rates surge over the past couple of months as carriers aggressively removed capacity.

But that did not mean that all trade lanes had been so successful, Sea-Intelligence said.

It pointed out that China-Middle East spot rates had halved since mid-March, and rates to South Africa and South America had also seen severe drops.

While global container shipping demand in the first four months of the year was down 8%, there were sharp regional differences in performance around the world as the pandemic progressed.

Container Trades Statistics chief executive Peter Webber noted that while container demand growth had risen steadily over the past few years, the cornavirus crisis ``has stopped that in its tracks”.

“There is hardly a trade lane that has escaped its impact,” Mr Webber told a webinar held as a part of the global liner shipping series of events. “On the Asia-Europe trade lane [the pandemic] has had a brutal effect on volumes. So far this year 4.6m teu has been shipped, 14% down on last year.”

In March, the export region that contracted the most compared with the year before was the Far East, which fell by 12%. In April, the export region with the largest year-on-year contraction move westward to the Indian sub-continent and the Middle East.

New forecasts published last week by the International Monetary Fund are likely to increase the distinctions between different regions.

“From a container shipping perspective this creates a significant problem, as this is the area from which demand is needed to derive cargo to the new generation of ultra-large container vessels,” Sea-Intelligence said.

“The International Monetary Fund projection – if it turns out to be correct – is telling us that the current low demand levels are likely to persist for a while. Consequently, the high levels of capacity withdrawals are also likely to persist. This is a view that is also backed up by the actual capacity withdrawals thus far seen in the third quarter.”

The IMF figures indicate that economic activity in the US, Europe and South America will be lower in 2021 than it was in 2019.

“This does not indicate a substantial pick-up in terms of container volumes, and carriers will be heading into a multi-year period of continued aggressive capacity management, if they intend to avoid a costly rate erosion,” Sea-Intelligence said.

It added that the success of carriers on the mainlane trades could be attributed to some extent to the alliance partnerships in which the operate.

“This would also imply that the main carriers might come to the conclusion that the model of consolidation, which works well in the main east-west trades, should also be applied to these other trades,” Sea-Intelligence said.

“Consequently, we might expect a development over the coming years, of increased consolidation pressure on the north-south and regional trades.”