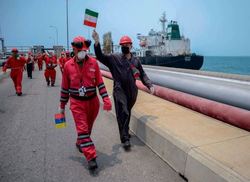 Four out of five tankers have arrived in the South American country delivering gasoline, with the last ship due to arrive over the weekend.

Despite US threats to prevent the shipments, the voyages were unimpeded, with a Venezuelan naval escort for each tanker as it entered the country’s territorial waters.

THE fourth of five Iranian-flagged product tankers delivering gasoline to Venezuela has arrived in the South American country, with the last vessel due over the weekend.

US exports of gasoline, naphtha, diluent and other refined products to Venezuela have been banned by the Trump administration since early 2019, with shipments from refineries in India and Spain the predominant suppliers. US was the biggest supplier of light products to Venezuela until sanctions were imposed.