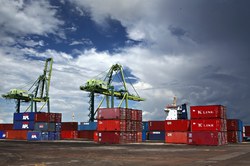 Investment analyst Jefferies estimates major freight agents have faced volume declines of around 10% in air and sea freight for the first quarter of 2020, ‘increasing to 30%-50% in April, which will likely be the trough’, before a gradual easing of lockdown restrictions.

FREIGHT forwarders may see volume declines of 20%-30% in air and sea freight in the second quarter of this year with a “trough” of 30%-50% in April, according to investment analysts Jefferies.

Analysis published by the logistics investment specialist estimated that major freight forwarders such as DHL, DSV, Kuehne + Nagel and XPO had faced volume declines or “volume pressure” of around 10% in air and sea freight for the first quarter of 2020.

This would increase “to 30%-50% in April, which will likely be the trough, before a gradual restart of activities on the back of easing lockdown restrictions”, Jefferies said.

“We are now assuming volume declines of 5% for both air and sea freight for [2020], followed by recoveries of 5% for” the full year.

On the sea freight side, Jefferies estimated volumes were 5%-10% lower in the first quarter of the year and likely to be down by 20%-30% from April/May.

It said it expected sea freight volume to be 5%-10% lower in the first quarter of 2020, with relatively higher exposure to east-west trades for both DSV Panalpina and Kuehne + Nagel.

It said Maersk indicated it expects global container volume to be 3%-5% lower during the three months, while Hapag-Lloyd said estimated volume slightly increased.

Container throughput figures from the Port of Rotterdam, the largest port in Europe, showed a decline of 5% in the first quarter of the year, Jefferies said. Hapag-Lloyd said volume for April is holding up, while May will likely come under increasing pressure.

“We are anticipating volume pressure of 20%-30%, in line with the targeted capacity reductions by the container liners,” added Jefferies.

“Alphaliner expects idle container capacity to increase to 3m teu in the coming weeks, accounting for 13% of the global fleet, versus 3% on average in 2019, after 250 scheduled sailings will be withdrawn” in the second quarter of this year. That will result “in capacity cuts of up to 30% on some of the most affected trade lanes”.