<![endif]--> Antwerp prepares for crisis and beyond 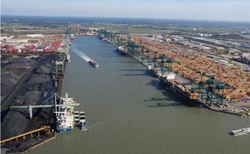 The impact of the coronavirus pandemic on container ports is yet to show in the figures. But its immediate effects could be followed by significant supply chain changes.

THE port of Antwerp could see its volumes fall by 15% this year but is warning that the longer-term consequences of the coronavirus pandemic could be even more disruptive.

“This crisis is different to the black swans of 9/11 and 2008,” said Antwerp international networks director Luc Arnouts.

“It is a combination of shocks, starting in China. At that point, some of us thought it would be limited to China and would only be a supply shock. But it moved at an unpredictably fast pace so that next to the supply shock came the demand shock from lockdowns. If you add to that the crashing oil price, you have all the ingredients for a really serious crisis.”

But the port and its customers needed to prepare for what comes afterwards as well, he said. While a black swan event was by definition unpredictable, companies could still build resilience into their businesses with the capability to react to unforeseen circumstances.

“The port business won’t be the same afterwards,” Mr Arnouts said. “It is uncertain, but it won’t be the case that we do business the same way as before.”

Supply chain managers are thinking about re-engineering their sourcing, he said.

“We have discovered we are relying too much on a limited number of suppliers from a limited number of countries. There will be a review of this. Will there be more nearshoring or reshoring so production is more local? We don’t know, but probably some of that will speed up.”

But supply chains could also get more complicated, as more suppliers from even more locations were involved in the total purchase decisions of supply chain managers.

“The post-coronavirus world will be a more complicated environment,” Mr Arnouts said. “We don’t know what the impact will be on ports, but we need to prepare for it now.”

Antwerp is particularly vulnerable to changing trade patterns, because more than half of its volumes are of containerised goods. Mr Arnouts expects a significant decline in the volumes this year, probably around the 15% level it saw during the global financial crisis.

“After the first quarter, we can say that the impact is not yet visible in the figures,” he said. “We have not seen a big drop in the number of sailings and the overall volumes might even be positive compared with last year. But the impact on the second quarter will happen and that will be significant.”

The economic slowdown in Europe means that there has so far been a mixed impact on containerised freight, with some areas such as food and pharmaceuticals doing well, but others, including fast-moving consumer goods shrinking.

“If you look at the cancellations by the container lines, then there will be a major impact,” Mr Arnouts said.

“In the coming weeks, there are 37 blanked sailings that would have come to Antwerp just on the Asia-Europe route. Losing 37 ships of 20,000 teu will have a big impact on the volumes going through our port.”