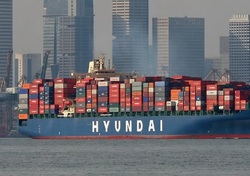 HYUNDAI Merchant Marine has warned of market impact from the coronavirus outbreak and US-China trade war as it posted continued losses for 2019.

The statement comes as the spreading disease is expected to take a toll on the economic growth of China as well as other parts in the world albeit less severely. At the same time, a large part of the US tariffs on Chinese goods remain in place despite the phase one deal reached by the two countries recently.

“In 2020, uncertainties stemming from the outbreak of the COVID-19, rising concerns over global economic downturn, and the impact of US-China trade conflict are weakening the prospects for rises in trade volume,” the South Korean carrier said in a release.

The shipping line’s operating losses stood at $33m in the fourth quarter of 2019, sending the whole-year deficits to $261m.

Nevertheless, the shortfall was trimmed from the level a year ago of $56m and $479m respectively.

Container lifting volume was not specified with its results. HMM has not published the figure for two consecutive quarters.

The company said the improved performance had been mainly contributed by rationalisation of the service network and the entry of service of five new very large crude carriers.

“In 2020, profitability is expected to be improved as a result of new co-operation with The Alliance and the deployment of twelve 24,000 teu containerships,” it added.

HMM will formally join The Alliance, which also include Hapag-Lloyd, Ocean Network Express and Yang Ming, as a full member in April. It is also the time when those super-sized newbuilding boxships will start to be delivered.

“Our capacity to impress our customers is more necessary than ever before,” said chief executive and president Jae-hoon Bae in a new year message last month. “In order to compete with other global top-rated carriers, offering differentiated value-added services is a top priority.”

He reiterated the company’s target to reach 1m teu in carrying capacity and $10bn in annual revenue.

HMM ranks as the world’s 10th largest box shipping carrier with a boxship fleet of nearly 374,000 teu in operation. It also has more than 400,000 teu of capacity on order, according to Alphaliner’s latest statistics.