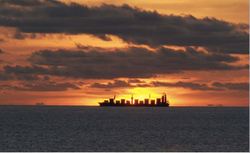 New report says lines will blank as many as 58 voyages on the Asia-Europe trade in the first quarter of 2020, more than double last year’s total. This number could rise further due to the Coronavirus outbreak.

CARRIERS ARE KEEN NOT TO MAKE LOSSES IN THE SLUGGISH MARKET THAT HAS TAKEN HOLD AFTER THE CHINESE NEW YEAR.

BLANKED sailings on the Asia-Europe trade are expected to more than double in number over the course of the first quarter of 2020 against last year, as carriers scramble to scale back on capacity in the slow post-Chinese New Year period.

However, even more sailings could be pulled due to the Coronavirus outbreak.

In a report published by Jacksonville-based BlueWater Reporting, as many as 58 voyages are due to blanked over the January-March period this year, up from 25 in the first quarter of 2019, a rise of 123% on-year. On the backhaul Europe-Asia trade the number of blank sailings is expected to rise from 25 to 49 voyages, according to the report.

However, this number is only lower as many of the Asia-Europe blanked sailings occur later in the quarter, as such, these will be reflected rather in the second quarter of 2020.

According to the report, the Ocean Alliance, closely followed by the Alliance, are expected to withdraw the most capacity on the Asia-Europe trade during the quarter.

While blanked sailings offer a reprieve for carriers when supply is plentiful, the measure is often to the detriment of shippers as they are forced to rejig supply chains to suit, and often at very short notice.

Bluewater said that as much as 1.3m teu of capacity will be withdrawn during the first quarter on the mainline trades out of Asia, with the transpacific route too set to experience a considerable uptick in blanked sailings of its own.

On the Asia to North America, excluding Mexico, route 58 container shipping voyages are expected to be blanked in the first quarter of 2020. This compares with just 43 last year. The trend will continue on the westbound trade, or from North America to Asia, with 59 voyages projected to be blanked against the 39 recorded in the first quarter of 2019.

Despite the extent of the blanked sailings, the report added that if carriers are to improve rates over the quarter then these shipping firms, particularly those serving the US west coast, will need to take stronger measures to cut capacity.

BlueWater Reporting said that on both trade lanes the majority of blanked sailings fall towards the end of the quarter in relation to the slowdown in business from the Chinese New Year, and not as a consequence of the Coronavirus. But it warned that “further blanked sailings may surface because of the planned extension of the New Year holiday due to the virus”.