<![endif]--> Should shipowners be investing in zero-carbon fuel production

Should shipowners be investing in zero-carbon fuel production 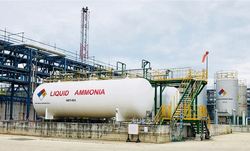 Australia is the biggest coal and the second-biggest LNG exporter in the world. It is now poised to cultivate a hydrogen industry. International collaboration with regional partners such as Singapore, Japan and South Korea will be key. But the need for new facilities, infrastructure and supply networks means that investment for fuel end-users, such as shipping companies, could be a defining factor.

Zero carbon fuels such as ammonia will be necessary to meet decarbonisation targets, but should shipowners be considering investment further upstream in their production?

LIQUID AMMONIA COULD BE USED AS A BUNKER FUEL AND AS A CARRIER FOR HYDROGEN.

SHIPPING companies may have to become more than just committed consumers and invest in the upstream production of zero-carbon fuels such as green ammonia and hydrogen to kickstart their supply.

The highly publicised targets set by the International Maritime Organization to slash shipping’s total annual greenhouse gas emissions by at least 50% by 2050 compared with 2008 were partly meant to signal to investors, fuel providers, manufacturers and others that completely new marine technologies and fuels have to come to the fore.

Ships ultimately only have to comply with rules for their own emissions. But that discussion has elevated the issue of a “green supply chain”, where a fuel’s emissions are actually non-existent across their lifecycle, from their production to their consumption.

Fuels are genuinely zero carbon if they are also produced from renewable sources or with emissions-capturing technologies, one argument goes.

Renewable Hydrogen,  a firm seeking to develop zero carbon fuel exports out of Australia, is targeting land upon which it wants to develop green hydrogen production in Northern Tasmania, one of the places that enjoys ready access to baseload green electricity and is adjacent to deepwater ports.

“The IMO initial strategy, has been a sea change in everybody’s thinking here,” said Brett Cooper, chairman of Renewable Hydrogen.

Mr Cooper believes that if supply chain participants come together fairly quickly, there could be meaningful production plant up and running within two to three years, producing about 100,000 tonnes a year of green hydrogen. That plant could expand to 1m tonnes soon after.

The idea is to then export the product for different purposes, including as liquid ammonia to power vessels.

“We think there is a real opportunity for this to emerge in Singapore because it is the largest bunker fuel hub in the world,” Mr Cooper said.

Before getting there, however, luring in these supply chain participants demonstrates the challenges with setting up the supply chain of the zero carbon fuel.

Australia, the world’s largest coal and second largest liquefied natural gas exporter, has a strong state-sponsored push to develop a hydrogen industry in the hopes of yielding another profitable exporting source.

In November 2019, the Australian federal government published a lengthy national hydrogen strategy. Its state governments have also published their own.

“A cautiously optimistic scenario could see an Australian hydrogen industry generate about 7,600 jobs and add about AU$11bn ($7.37bn) a year in additional GDP by 2050. If global markets develop faster, it could mean another 10,000 jobs and at least AU$26bn a year in GDP,” the federal study said.

It also acknowledged the role renewable hydrogen can play in the production of ammonia and, in turn, the role ammonia can play as a carrier of hydrogen.

Mr Cooper believes that in the quest to build this industry, the country could learn from its past with LNG, where offtake customers, such as Mitsubishi, invested in upstream operations.

The natural investors or co-investors in green ammonia production plants in Australia would be the companies that are likely to use the energy in the receiving countries, he believes.

“With ammonia, we could see some of the key operators and investors in the marine space maybe investing even upstream in these productions plants — because they have an opportunity here to effectively invest in their fuel supply chain,” he said.

Financiers are looking at projects such as Northern Tasmania with interest but have not yet committed, Mr Cooper said. And while funding of the industry will change as time passes, a lot of funding will initially be necessary, which is why downstream players, the end users of this ammonia, will be important.

“If they put up some equity and guarantee a certain level of offtake then the financiers will be able to come in, because the market for large for green ammonia for bunker does not exist at the moment,” he said.

A senior ship financing source agreed that equity from a partner, such as a shipping company, during the construction period of facilities such as port terminals is crucial to mitigate the potential risks lenders believe they face with a new project.

“If you are a bank, you will need a strong sponsor. If it is a new renewables [project], these projects are not done 100% by one company. More often, there are local partners,” the source said.

Maersk has been one of the shipping companies that has taken a lead role in the public debate about reducing emissions.

A spokesperson for Maersk highlighted that the firm has been manufacturing fuels to cover a small part of its own consumption for some years. It is engaging with a broad number of partners to support the development of viable solutions to reduce the carbon footprint of shipping, including zero-carbon fuels.

“In the normal course of business, Maersk’s strategy is to continuously review and optimise its existing portfolio as well as explore new investment opportunities. If any relevant business case arises we will thoroughly examine it on a case-by-case basis,” the company said.

However, exploring whole new business areas is not something the company is considering at the moment.

The production and export of green hydrogen and ammonia is a new venture. It will incur high capital costs for those who decide to invest.

Mr Cooper believes that aside from the involvement of committed offtakers, the use of financial engineering tools, such as green bonds, may be necessary.

“The physical engineers could do their bit and make everything cheaper, but financiers can make it cheaper by harnessing financial instruments that have not hitherto been used in the industry,” he said.

In the future, single funding structures, inducing the production plant in Australia, bunkering infrastructure and even the ships themselves that can run on the green ammonia, could emerge.

“This could all be wrapped up into a single fuel supply chain that could attract the type of funding the banks behind the Poseidon Principles are looking for. They are looking for scale,” Mr Cooper said.

He acknowledged that the fuel price would be considerably higher in the early days and government support may be needed. However, he believes progress in technology will help reduce the cost of renewable energy production, such as green ammonia. In the long term, this move forward in technology would cut the ultimate cost.

Globally, the shipping industry is undertaking efforts to advance the deployment of ammonia as a ship fuel, and potentially assess and address the various safety concerns.

MISC, Lloyd’s Register and other are collaborating on a project to develop an ammonia-fuelled tanker. MAN Energy solutions, ABS and partners will work towards building a 2,700 teu ammonia-fuelled feedership.

These projects are crucial to showcase the potential of new fuels — as well as their shortcomings. But ultimately, substantial investment in the physical supply chain will be necessary if they are to become viable alternatives for ships.