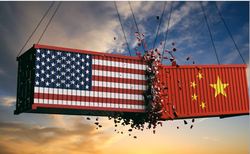 While box shipping is expected to experience a limited short-term spurt of activity from the signing of the ‘phase-one’ agreement, dry bulker players stand to enjoy the forthcoming surge in US agricultural exports to China. News about the deal also raises the prospect of the US lifting its sanctions against Cosco Shipping’s tanker units, which may result in a re-pricing of VLCC rates.

Economists have expressed optimism by revising up the growth forecasts for both countries next year, but warned the deal should be treated with a dose of circumspection.

INDUSTRY observers are cautious about a possible US-China trade deal that could brighten the outlook for shipping demand.

A truce, which is allegedly imminent after an 18-month long trade war between the world’s largest two economies, presents a mixed short-term picture in different sectors of shipping, according to analysts and experts approached by Lloyd’s List.

While box shipping is expected to encounter limited near-term impact from the signing of the “phase-one” agreement, dry bulker players stand to enjoy the forthcoming surge in US agricultural exports to China. News about the deal also raised hopes about US lifting sanctions on Cosco Shipping’s tanker units, which would likely bring down the very large crude carrier earnings witnessed by competitors since those ships were blacklisted.

This comes after media reports on Thursday that Washington and Beijing were close to signing a limited trade agreement, which will enable a swap of US tariff reductions for China’s boost on spending on US farm goods among other concessions.

The deal calls for China to buy $50bn of US crops in 2020, along with energy and other goods. In return, the US will reduce the current tariff rates — ranging from 15% to 25% — on Chinese exports and cancel new duties due to take effect on Sunday, the Wall Street Journal reported, citing Michael Pillsbury, an adviser to President Donald Trump.

This is because US box imports over the past two months indicate no significant tariff-led rush orders, a sharp contrast to the year-ago period. In his view, the latest rebound on transpacific trade this month is more driven by demand in relation to the Chinese New Year and the upcoming 2020 sulphur rules, which will drive up shipping costs.

“The strong volumes should continue in January for the pre-lunar new year shipments, but both carriers and shippers are expecting a big drop in volumes post lunar new year,” Mr Tan said.

The longer-term picture remains obscure. The tariff cut could help China win back some of the exports lost to other countries, such as Vietnam, but there is a big question mark about whether overall transpacific volume will enjoy a boost next year.

“This will be driven more by the strength of the US economy,” he added.

Nevertheless, some economists have already prepared to tune up their forecasts on the positive news from Washington.

Tom Rogers, head of macro consulting Asia at Oxford Economics, reckoned the “phase one” deal, if it materialises, would raise the US GPD growth next year by 0.2 percentage points.

The organisation was also likely to revise up its forecast on China’s growth in 2020 by 0.3 percentage points, he said, although this view was partially backed by improved data in recent months.

“So the deal will boost confidence, and have positive impacts via lower prices for consumers and businesses who want to import goods that would otherwise have had higher tariffs,” said Mr Rogers.

However, he argued that a rally on bilateral US-China containerised trade was unlikely to be a near-term event. This partly because the limited trade agreement is hardly enough to deter the ongoing manufacturing migration in China.

“The deal is one step of many that would need to be taken to resolve China-US tensions on a durable basis, so supply chain relocations, which have occurred as a result of the tensions, are unlikely to be reversed because of this one specific agreement.”

Mr Rogers also warned of “the risk of a re-escalation” because the deal does not address the key issues that so irked the US administration (technology, national security, and industrial policy) and which fundamentally led to the Sino-US economic dispute.

That said, the dry bulker sector stands to reap gains from the forthcoming surge in US farm exports to China as part of the trade deal.

Klaveness Asia’s Punit Oza said the trade pact signalled positive signs for panamaxes and longhaul shipments from the US Gulf in the short term.

“[The fourth quarter] is traditionally the highest quarter for US soyabean exports. That is the reason why we saw the temporary pick-up in shipments.”

But the volume would shift back to the east coast of South America when the harvest season there starts from end-March 2020, he added.

The trade deal will not stop China from buying soyabeans from the continent in the Southern Hemisphere in order to benefit from cheaper prices and to diversify its sources of procurement for security reasons.

In fact, Beijing was said to be offering a buyout of Brazilian soyabeans while asking Brasilia to import US beans for domestic consumption, said Mr Oza. This may even create a new trade pattern for this type of good.

“If this happens, we would actually see a new trade between Brazil-US, which will be positive for tonne miles,” he said.

A Singapore-based broker was also sceptical about how long the boost in US-China soyabean trade would last. “China is already getting the required volume from other sources, and a full restoration to the pre-trade war volume looks a bit unrealistic, despite the recent shipments from US.”

News about the imminent trade agreement also comes as the US is poised to ramp up its oil and gas exports because domestic production is exceeding consumptions.

While the deal may re-open the door for US energy flows to the Chinese markets — which will perk up tanker earnings with increased tonne-mile demand — it has also raised the prospect that the US sanctions on part of Cosco Shipping’s tanker business may be removed soon — which might strike a short-term blow to freight rates.

Cosco Shipping Tanker (Dalian), one of the blacklisted companies, owns a fleet of 43 oil tankers, including 26 very large crude carriers. Most of the vessels are still anchoring near China’s coast, according to vessel tracking data, despite a grace period granted by Washington in October until December 20.

The release of the tonnage would increase vessel supply and subdue market sentiment, resulting in a decline in VLCC earnings, predicted a China-based shipping analyst.

The stock markets have already reflected the concerns, the analyst noted. Cosco Shipping Energy Transportation, the listed parent of Dalian Tanker, has seen its share prices in Shanghai and Hong Kong, increase by more than 2% on Friday.

At the same time, the price of its Shanghai-listed rival China Merchants Energy Shipping, whose VLCC fleet has benefited from the withdrawal of the sanctioned tonnage, has dropped by 2.3%.

Moreover, the gas industry is also keen for a peace settlement between Beijing and Washington because it wants a clear path to press on with its multi-billion-dollar expansion projects.

Drewry’s senior research analyst Aman Sud earlier Lloyd’s List that nine out of the 12 ethylene expansion projects in China have been put on hold regarding concerns that ethane may make the list of goods subject to retaliatory tariffs.

China has already slapped a 25% tariff on liquefied natural gas imports from the US.

Poten & Partners head of Asia Pacific Sophie Tan suggested the removal of this tariff, along with the end of the trade dispute, may spur Chinese national oil companies to buy more US LNG.

But they will seek mitigation against the risks of a continuing dispute. They will also be driving a very hard bargain.

The unlocking of the new trade flow from the US into China would not only perk up freight rates in this market, but also give Chinese shipbuilders the much desired opportunity to climb the value chain by building more gas carriers.