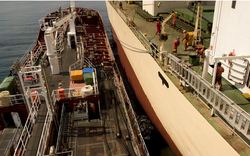 As well as gaining on the price spread over non-compliant fuel oil, compliant fuel oil is being traded in larger volumes these days, one sign of the mandatory low sulphur transition finally kicking in.

SHIPOWNERS ARE FINALLY STARTING TO LOAD VESSELS WITH FUEL COMPLYING WITH IMO 2020 REGULATIONS AND THIS IS REFLECTED IN THE RECENT FUEL PRICE MOVES.

PRICE differentials between compliant and non-compliant fuel oil have widened to levels not seen before this month at the world’s top bunkering hub as shipping lines embark on the mandatory low sulphur transition.

On November 14, the VLSFO-HSFO price spread reached $262.50 per tonne, the highest so far, based on data from actual trades gathered on a daily basis by the pricing agency at the top bunkering port by sales volume.

Volumes transacted for VLSFO for the trades have also surpassed those of HSFO in November.

These observations suggest that the switch to ship fuels complying with the International Maritime Organization’s 0.5% limit on sulphur in marine fuel has begun in earnest.

“Demand for VLSFO has picked up strongly in Singapore since early October — consumption is no longer limited to those using the fuel for testing purposes or voyages to China’s emissions control areas.

“Instead, owners have started cleaning their tanks and are consuming larger-sized VLSFO stems for longer journeys,” Argus Media noted.

In September, Japan’s NYK Line was among the early-movers to have loaded compliant fuels on several vessels with no scrubbers installed on board.

But the shipping line clarified to Lloyd’s List that it did not start consuming compliant fuel during the same month.

Lloyd’s List has separately learnt that other shipping lines have generally elected to first load compliant fuels on vessels plying long-haul trades only from late October.

VLSFO available for spot purchases, however, may become harder to come by as shipping lines increasingly turn to locking in term contracts with suppliers beyond next June, Argus Media suggested.

A price spread of at least $200 per tonne between VLSFO and HSFO is generally considered as supporting investments in scrubber installations. Ships fitted with scrubbers are still allowed to burn and carry HSFO on board after the IMO global sulphur cap kicks in on January 1.