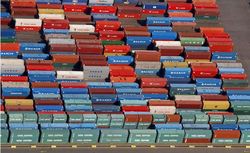 The trade dispute between the US and China has been blamed for the slowdown in box volumes. But new figures show that the malaise is far more widespread.

GLOBAL volume figures contracted during September, shrinking by 0.4%, but not all the blame can be put on the US-China trade war, according to analysis by Sea-Intelligence.

“The development seen in September only serves to reinforce the pattern seen throughout 2019,” said Sea-Intelligence chief executive Alan Murphy. “This pattern has basically been months of weak demand followed by a spike of higher growth – and then again followed by an even larger growth drop more than negating the otherwise optimistic spike.”

“While this is of course positive growth, it does not inspire a great deal of confidence in the strength of the container shipping market,” Mr Murphy said.

The figures also called into question the gross domestic product multiplier effect, which has historically seen container volumes grow at a faster rate than the global economy.

“In the wake of the financial crisis it has been realised that this rule of thumb clearly is no longer correct, and the multiplier has been dropping sharply as a consequence of the completion of the containerisation process, as well as reaching the logical endpoint of the outsourcing processes,” Mr Murphy said.

While container shipping is still expected to grow in line with GDP, the latest International Monetary Fund GDP outlook for 2019 puts growth at 3%. But weak container demand growth of just 1% indicates a multiplier of just 0.3.

The ongoing trade dispute between the US and China is often pointed to as a major reason for the slowdown in container demand, but Mr Murphy said this argument was undermined by the data.

When North American growth was stripped out from the figures, global growth was just 0.9%.

“This indicates that there is an inherent underlying weakness which is independent of the US-China trade war,” he said.

Import volume growth in Europe has slowed since a strong start to the year, falling to a 0.5% contraction in September.

While North American volumes were positive for the quarter as a whole, in September both import and exports contracted compared to September 2018.

“This should be a cause for concern, as the 2018 post-peak season volume surge due to front-loading of Transpacific cargo only really hit in October/November 2018, so the contraction in September is not simply a question of a high 2018 base,” Mr Murphy said.

“The carriers’ collective orderbook for new capacity injection is historically low, and this is indeed a good sign for restoring market balance over time,” Mr Murphy said.

“However, the demand weakness seen thus far in 2019 clearly puts pressure on the carriers regardless, and it is also in this light we should see the record high levels of blank sailings, a level which is exceedingly likely to be upheld should this weakness in demand persist.”