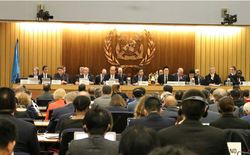 The International Maritime Organization’s working group on greenhouse gas emissions meets in London in mid-November to discuss proposals to reduce GHG emissions from shipping. BIMCO hopes its latest proposal can satisfy different sides of the debate.

The shipping association suggests limits on power, which are based on average speed, to help curb emissions in the short term.

BIMCO is calling for the global regulation of vessels’ power to curb greenhouse gas emissions and also appease supporters of speed regulations.

The world’s largest shipping association has tabled a proposal to the International Maritime Organization ahead of a working group meeting in London next month to assess several proposals geared towards short-term reductions of ship emissions.

It specifically suggests the power limit would depend on the performance of an average ship under real weather conditions built in the decade prior to Energy Efficiency Design Index regulation coming into force in 2013 and sailing at an agreed average operational speed.

That average operational speed is in turn based on the average trading speeds of each ship type over the past three years.

“Aiming a regulatory measure at ship’s efficiency would be desirable as it is enforceable and provides for a goal-based approach,” BIMCO said.

Regulators should also consider factoring in the carbon content of the fuel used by the ship, it said.

“The proposed concept would have the benefit of capturing the emissions reductions already achieved since 2008 by slower steaming while maintaining the present competitive playing field between ships,” BIMCO said.

The IMO working group does not make final decisions on regulations and its conclusions help progress work on emissions policy. The IMO’s ultimate environmental authority meets next April.

Mandatory speed limits are a highly contentious measure. Proponents argue that it is the best option the industry has to immediately roll back emissions, while opponents claim it will be very difficult to enforce and will encourage owners to keep more inefficient ships for longer periods at sea.

Those opposed to speed limits have expressed support for proposals that target operational efficiency of vessels through propulsion-related regulations.