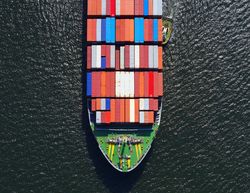 August was a slow month for deliveries, but also for demolition. The net result was only small growth in total boxship capacity in the global fleet.

Cosco’s revelation that it has no plans to develop 25,000 teu containerships indicates a sense of collective caution among owners.

THE container shipping sector may well have breathed a collective sigh of relief at the news that Chinese box shipping giant Cosco has to develop 25,000 teu containerships.

Reports earlier this year indicated that Cosco was investigating the viability of ships that would have record-breaking container capacity, and sparked concerns over the feasibility of adding even more capacity to the over-tonnaged container segment at a time of slowing growth.

But with ships of 23,000 teu already plying the mainlane trades, moves to utilise clever design to claim yet another ‘world’s largest boxship’ bragging rights would not have been the main bone of contention for the industry.

Instead, it would have indicated a desire by Cosco to go for market share in an increasingly tight market.

Arguably, the most important comment from Cosco Shipping vice-president Wang Haimin was not that the company was not looking to develop 25,000 teu ships, but that Cosco would look to expand its fleet only in line with market growth.

Having not ordered any new ships since 2016, Cosco’s focus would be on “organic growth”, he said.

This is important, as the Chinese line has expanded rapidly over the past few years, through mergers and the acquisition of Orient Overseas Container Lines, to become the third-largest global container line by capacity.

Cosco’s caution in ordering, like that of the world’s largest player, Maersk, indicates that the container industry has learnt some of the lessons from the first half of this decade, when overordering was rife.

According to figures from Lloyd’s List Intelligence, released this week, the world containership fleet remained almost static at 22.2m teu at the end of August.

The net gain for the month amounted to just four ships, comprising 52,630 teu, with deliveries of new tonnage muted.

Only one ultra large containership was reported entering service during August, the 23,656 teu MSC Isabella, part of Mediterranean Shipping Co’s series of 24-row boxships that hold the current capacity record.

MSC Isabella joins the 23,756 teu MSC Gülsün, which last month completed its maiden voyage to Europe, along with MSC Mina and MSC Samar, on the 2M alliance’s Asia-Europe AE-10/Silk service.

In total, there will be 11 ships in this series, with six coming from Samsung Heavy Industries and five from Daewoo Shipbuilding and Marine Engineering.

While the low level of deliveries will have helped keep supply in balance with demand, and there were no confirmed orders reported, more ships are on the way.

Last month Taiwan’s Evergreen announced that it was seeking to expand its fleet by 11 ships with a $1.8bn expansion plan.

The carrier said that it was seeking five to six 23,000 teu newbuildings via direct ordering at yards for a maximum of $960m and another four to five units of the same type through chartering for $800m in total.

Although contracts have yet to be signed, the plans have been signed off by Evergreen’s board.

Despite these additions to the fleet, however, analysts at MSI believe that there will be a “gradual easing” of supply-side pressure over the next few months, with scrapping being the determining factor.

Nevertheless, MSI still believes the prevailing attitude of liner companies towards newbuildings remains one of caution.