Digitalisation not about replacing human crews 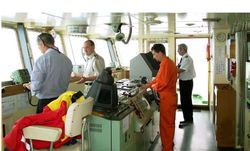 There is a common misconception that digitalisation in shipping is ultimately geared towards autonomous operations and this will eventually result in sharp reductions or even replacement of human crews.

INCREASING DIGITALISATION WILL NOT REDUCE THE REQUIREMENT FOR CREW.

FOR shipmanagers, many of whom are based in Asian hub Hong Kong, the idea that autonomous shipping will reduce crew requirements does not really hold true.

Digitalisation is viewed as a means to an end, which amounts to greater efficiency and safer operations.

This comes across clearly as shipping’s self-proclaimed tech guru, and now head of Wallem, Frank Coles reiterates in his Day of the Seafarer’s message that the human element cannot be divorced from ship management operations.

Declaring that Wallem would continue to invest in the training and technological tools to enable seafarers to do their jobs, Mr Coles emphasised that this was in support of the “human element” and to “empower seafarers and their colleagues who support them from shore”.

“We also do so at a time when the fervour surrounding digitalisation and automation sometimes appears to suggest that crews represent an obstacle to efficient fleet operations that would be better eradicated,” Mr Coles said.

While acknowledging that new technology is a key part of modernising ship operations, he cautioned: “Undervaluing crews in this way is hugely demoralising; it is also based on a misconception.”

Dismissing ideas that using technology such as CCTV cameras or running algorithm-based analytic programmes can replace deck officers at sea or experienced superintendents on shore, he said: “Instead, let’s focus on deploying technology in ways that help crew perform better.”

Mr Coles added that technology must support and empower, not subtract and hinder.

In this respect, Wallem is walking the walk, as Mr Coles declared it would after taking over in April. Within weeks it had signed on to the BASSnet Fleet Management System with a view to instilling greater standardisation in the industry.

Leveraging technology in fleet management systems is of course not new. Hong Kong-based shipmanager Fleet Management claims to have pioneered the effective use of data through its PARIS software, and is well-positioned to take advantage of the recent trend of increased digitalisation on board vessels and the effective use of big data.

“We understand we can leverage the advancement in digital technology for superior and cost-effective management of a vessel,” said executive director Sanjay Chandra.

He pointed out that Fleet had narrowed down two areas where significant improvement was possible: vessel fuel consumption and reliability of equipment.

On the former, it was found that increased drag from hull fouling was the biggest negative factor. A software solution that was able to allow monitoring of hull drag through advanced sensors could achieve savings of $375,000 per year for a typical 56,000 dwt bulker.

Continuous data collection would also provide value-added information on coating performance, the effect of temperature and idle condition on fouling, he added.

For equipment monitoring, Fleet is working with vendors to provide equipment for critical running equipment as well as cylinder and fuel oil.

Mr Chandra said these solutions will then be integrated into a software solution while simultaneously working with a classification society to accept this solution in lieu of open-up inspections.

Other ways in which digitalisation is being used by shipmanagers include V.Group’s rolling out of its Project Embark, an app-based system that it claims will transform the way it handles crew and customers. The group aims to provide a one-stop shop for crew management and crew services, from recruitment and training to travel and catering services, with the system.

Aiming to solve the perennial problem of too much paperwork and hardcopy-based documentation processes in the industry, the app will provide a seamless experience for crew to support their professional development, performance appraisal, training, and documentation uploads throughout the vessel mobilisation process, including travel arrangements.

The experience of searching for assignments, signing contracts, and managing documentation will be as functional as booking a flight or shopping online, the group said at the initial roll-out of the system at Crew Connect in Manila at the end of 2018.

In major Asian crewing centres such as the Philippines and India, having to physically be present to submit documents at company offices can be a time-consuming and arduous task as seafarers travel from their homes to congested cities. This eats into valuable time ashore and affects the ability of managers to plan effectively, V.Group said.

“Project Embark is about providing an effective, simple and globally connected experience for our seafarers, offering the opportunity for career development with V.Group,” Mr Falkenberg concluded.

Yet another leading Hong Kong-based shipmanager, Anglo-Eastern Ship Management is using digital technology in even more futuristic ways, with virtual and augmented reality training, which recreates or augments reality by digital means. This not only helps to attract a younger, more tech-savvy generation of seafarers but also enhances safety.

Anglo-Eastern has developed systems at its main training centre, Anglo-Eastern Maritime Academy in India, that make use of this technology to enable cadets to virtually carry out exercises as they would be done on an actual vessel but with a greater element of safety.

“The learning habits of millennials are evolving,” said group managing director of QHSE and training Pradeep Chawla, adding “they love technology and have grown up playing with technology”.

“The immersive experience of learning in virtual reality is thus exciting for young seafarers and provides a safe and risk-free environment in which they can learn experientially and master basic skills before transitioning to real-life situations,” he added.