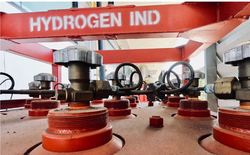 International shipping has committed to slash emissions by at least 50% by 2050 while hydrogen is often propagated as a viable future option to get there. But the IEA believes increased production of hydrogen over the next few years will also help shipping by creating new international trading routes.

A new report by the IEA identifies Japan and Europe as main hydrogen import sources that shipping can serve.

SHIPPING can benefit from new international trading routes enabled by upcoming hydrogen production projects over the next few years.

Regions such as Africa, the Middle East and Chile have the potential to produce hydrogen at a relatively low cost, whereas other areas, such as Japan and Europe, face high production costs and may well opt for imports of the clean fuel.

“Japan has major plans for imported hydrogen in power generation, reflecting the potential for imported ammonia to be co-fired in existing power plants to reduce CO2 intensity,” the IEA said.

Much of the trading activity is expected to take place around the Asian Pacific region, where New Zealand is eyeing 300,000 tonnes of hydrogen exports per year by 2030 from its production plant in Tarankia. At the same time, Australia is potentially a crucial supplier for Japan and South Korea owing to its coal reserves.

The Crystal Brook Energy Park in South Australia is poised for a final investment decision in 2019 and subsequent commissioning in 2021. Another electrolyser project near the port of Lincoln, which can produce up to 18 kilo tonnes of hydrogen per year, will kick off in 2020, backed by an A$118m ($81.1m) budget.

Japan and Australia have also agreed on an A$500m project that, via the so-called carbon capture, utilisation and storage (CCSU) process, will extract hydrogen from Australian coal then convert it to liquid for export to Japan. The project is anticipated to start in 2021.

Other potential sources that could deliver converted hydrogen to Japan for its power sector are Brunei’s upcoming natural gas plant and even Saudi Arabia, again based on its natural gas production.

Europe could also benefit from importing hydrogen from Africa and the Middle East where green hydrogen can be produced cheaply.

“If CO2 storage is equally accessible in Europe at similar costs, however, it is likely to be more cost-effective to import the gas and produce hydrogen in Europe. Natural gas can be imported with local conversion to hydrogen with CCUS at a cost of around $ 2.3 per kilogram of H2,” the IEA said.

For any of this to happen, however, international co-operation on a governmental level will be necessary and investment will have to be made.

IEA said that the new market would need developments of storage tanks, liquefaction and regasification plants, as well as conversion and reconversion plants.

It noted the lack of ships that can carry pure hydrogen at the moment.

“Such ships would be broadly similar to liquefied natural gas ships and would require the hydrogen to be liquefied prior to transport,” the IEA wrote, adding that the ships would be fuelled by boil-off hydrogen.

There is an ammonia trade equivalent to about 3m tonnes of hydrogen per year, primarily from the Arabian Gulf and Trinidad and Tobago to Europe and North America.

The IEA noted shipping is the most effective way to transport hydrogen for distances above 1,500 km. Below that mark, pipelines is likely to be cheaper.

“These alternatives are cheaper to ship, but the costs of conversion before export and reconversion back to hydrogen before consumption are significant. They may also sometimes give rise to safety and public acceptance issues,” the IEA wrote.

Shipping fuel of the future?

The IEA argued that shipping, like aviation, was an opportunity for hydrogen-based fuels as the sector lacked available low-carbon fuel options.

“Ammonia and hydrogen have the potential to address environmental targets in shipping, but their cost of production is high relative to oil-based fuels,” the IEA said.

Compared to other alternative fuels, the main impediment for the hydrogen-based fuels to prevail will likely be the higher cost and the non-existent bunkering infrastructure.

The IEA admitted it was difficult to assess the exact cost of liquid hydrogen as a shipping fuel, but it said the cost would be primarily attributable to storage and bunker vessels.

Meanwhile, infrastructure that can fuel ships with ammonia needs massive expansions for the gas to become a fixture in the marine fuel landscape.

“As an indication, satisfying shipping demand in the long term would require 500 metric tonnes of ammonia, almost three times the level of current global production and about 30 times the volume of ammonia currently traded,” the IEA said.

The IEA conceded that shipowners had no direct control over the infrastructure development, which will determine, to some extent, the alternative fuels that they will use to meet future environmental targets and regulations.