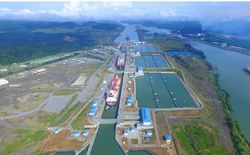 What can one of the world’s most crucial trading corridors do to combat climate change? The Panama Canal Authority’s environmental specialist hopes new green tools will do a quite bit for the country and beyond.

The authorities in Panama hope to take their findings from new carbon-cutting tools to contribute to debate at the International Maritime Organization.

ONE of the world’s busiest waterways is stepping up efforts to reduce greenhouse gas emissions.

The Panama Canal is hoping that a series of environmentally friendly tools will help curb emissions and could contribute to governments’ future policies on decarbonisation, according to Alexis Rodriguez, the Panama Canal Authority’s environmental protection specialist.

The canal operator has in recent years tried to incentivise companies to reveal their relative emissions performance through a voluntary scheme named the Green Connection Environmental Recognition Programme.

With a reduced environmental footprint featuring prominently in corporate social responsibility agendas and sitting high on investor and lender priorities, some of the world’s leading shipping companies have signed up to the voluntary programme.

A major attraction is that those who perform well on its “environmental premium ranking” — in which vessels are listed based on performance factors such as nitrogen oxide emissions and the use of liquefied natural gas as a fuel — have a better chance of being served first in the canal in case of overcapacity.

To attract more business, the authority is adding more benchmark parameters and will roll out a third performance tier in September.

“At the end, we are giving recognition,” Mr Rodriguez told Lloyd’s List. “But that recognition is different from money. You are getting the opportunity to get in front of the queue. So that is more important.”

The programme features a carbon calculator, which effectively measures the carbon emissions of transiting vessels and how much they saved by using the canal, based on the average values of various indicators.

The latest monthly report shows Hapag-Lloyd vessels saved the most by using the canal at 948,436 C02 tonnes. Maersk Line was in second place, with 897,603 C02 tonnes saved.

But from September, the calculator will include real time enhancements that could potentially change the rankings.

“For us, it is really important that all the sectors take into account their contributions,” he said. “This is our way to make our contribution.”

The IMO was criticised last month for failing to make genuine progress on greenhouse gas emissions reductions. Some non-governmental organisations accused governments of intentionally slowing down negotiations by insisting on procedural matters, rather than deliberating the proposed measures.

Panama is no stranger to vessel speed restrictions and its experience could become relevant when negotiators tackle the subject in 2020. Since late 2014, ships using the canal have been restricted to a 10-knot maximum speed in parts of the Gulf of Panama to protect whales.

Mr Rodriguez said the PCA may launch a study to assess the environmental effect of this measure based on the data they have amassed over the past years.

The authority’s focus in the coming months will be implementing the 2020 sulphur cap. The use of heavy fuel oil is not permitted on the Panama Canal, with the exception of pure terminal calls, so vessels with conventional engines have to rely on distillates.