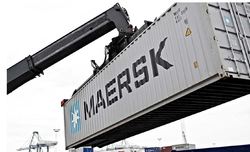 Higher freight rates boost revenues and earnings even as volumes decline. But the world’s largest carrier warns about the impact of trade tensions in the months ahead.

The world’s largest container line reported a good start to 2019 but warned that ‘considerable uncertainties’ as a result of global trade tensions will probably hurt its business.

The Danish company said it made a significant turnaround in its fortunes during the first quarter of the year on the back of improved freight rates and lower operating costs.

“We are still facing considerable uncertainties from weaker macro numbers as well as the risk from trade tensions and implementation of IMO 2020,” said chief executive Søren Skou in the carrier’s interim report.

The US earlier this month announced that tariffs on $200bn worth of Chinese goods would increase to 25% from 10% on May 10.

Beijing has retaliated, raising levies on $60bn worth of US products.

“In the first quarter, volumes on transpacific trade between Asia and North America have shown signs of decline,” Mr Skou said. “New tariffs can potentially reduce expected growth in global container volumes by up to one percentage point.”

Speaking in a presentation to analysts, Maersk chief financial officer Carolina Dybeck Happe said organic volume growth in the ocean segment was expected to be between in line with the estimated market growth of 1%-3% in 2019.

“There are still some uncertainties related to market outlook, mainly related to weak economic growth, in addition to risk from a further escalation of trade tensions between the US and China,” she said.

Any volatility would significantly affect Maersk’s outlook, she added.

“Changes in freight rates have a high impact on ebitda and also on volumes,” Ms Dybeck Happe said.

Mr Skou said that the company was focused more on profitability than growing beyond the market in general.

Nevertheless, first-quarter growth was lower than the market in general.

“Our focus is in driving profit and cashflow in the business,” Mr Skou said. “We have a size now in the ocean segment where we are certainly not going to be at a disadvantage from a scale point of view. Whether we have half a percentage point of market share more or less is not going to ruin my day.”

The focus would be on improving earnings in the ocean segment and driving growth in logistics and services, he added.

“We still believe we can achieve 1%-3% growth in the full year, but that means we will have to accelerate that in the coming quarter,” he said.

Earnings before interest, tax, depreciation and amortisation in its ocean division rose 42% to $927m, driven by a 3.9% increase in average freight rates that pushed revenue to $6.9bn.

This was despite volumes falling by 2.2% as the effects of frontloading on the transpacific in the fourth quarter of last year took their toll on this quarter’s volumes.

Net losses from continuing operations improved from $311m in the first quarter of 2108 to $104m in the current period.

Maersk said its “strategic transformation” had led to synergies of $130m during the quarter.

“We made good progress on the transformation, where we have completed the separation of the energy businesses, further integrated our organisation and continued to improve our product portfolio,” said Mr Skou.

“This resulted in a solid cash return on invested capital and delivery of synergies, getting us closer to our target of $1bn by end of 2019. Non-Ocean revenue and gross profit in Logistics & Services grew but needs to accelerate in the coming quarters.”

The carrier reiterated its guidance for the year, subject to “further restrictions on global trade and other external factors” and expects full-year ebitda of around $5bn.

In its core Ocean segment, profitability increased as Maersk focused on margins and lower network costs from synergies with Hamburg Süd.

“Despite a decrease in the bunker price from previous quarters, the bunker price was higher than in the first quarter of 2018 and continued to be above $400 per tonne,” Maersk said. “Additionally, volumes declined versus last year across all trades, except for the intra-regional and Europe trades, especially on the North-South trades due to weak demand on Latin America and Oceania trades. The backhaul volumes accounted for more than half of the overall volume drop.”

The frontloading seen on the Pacific in fourth quarter of 2018 also affected volumes in the first quarter. A revenue increase of 1.7% to $6.9bn was driven by a 0.6% increase in freight revenue, as average rates rose to $1,903 per feu. But congestion and frontloading also boosted detention and demurrage revenues by 10%, Maersk said.