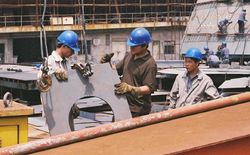 Second time is the charm. After failing to agree during MEPC 73 in October 2018, delegates at MEPC 74 easily agreed on the requirements and dates for third phase of the energy efficiency design index.

MEPC 74 agrees dates and targets for third phase of EEDI, starting in 2022.

TIGHTER RULES FOR CONTAINERSHIPS AND LNG CARRIERS WILL TAKE EFFECT IN 2022.

ENVIRONMENTAL regulators have resolved long standing thorny issues on the energy efficiency requirements of new containerships, LNG and gas carriers and other vessels and have agreed on more stringent rules for newbuilds.

The IMO’s 74th Marine Environment Protection Committee that convened in London last week approved the dates and targets for the third phase of the energy efficiency design index, the IMO’s signature decarbonisation measure.

The EEDI, which will enter its second phase in 2020, mandates how much more efficient ships built after a certain date must be compared to the average performance of their fleet between 1999 and 2008.

The trouble-free EEDI deliberations last week were a stark contrast to MEPC 73 in October 2018, which was originally set to approve new rules but never did, as for LNG, gas carriers and other ships pushed back the decision to MEPC 74.

Delegates at MEPC 74 fully embraced a proposal by the box carriers' premier lobby, the World Shipping Council, for containerships, which are often cited out as having the greatest margin for improvement.

Under that suggestion, EEDI phase three rules take effect in 2022 and the targeted reduction rates are divided according to vessel size, with the smaller ships facing more lenient requirements. Improvement targets range from 15% to 30% for ships between 10,000 dwt and 15,000 dwt to 50% for those boxships 200,000 dwt and above.

This segregated approach deviates considerably from the 40% uniform reduction rate a number of delegations had supported during MEPC 73. But that same committee had also explicitly invited WSC to provide a proposal to MEPC 74 to help draw talks to a conclusion.

But the third EEDI phase for most vessels, including bulkers and tankers, begins in 2025 with a 30% reduction rate.

EEDI aside, during MEPC 74 delegates made little progress on decarbonisation measures, with the majority of the discussions being absorbed by important but procedural issues.

“IMO’s decision to move up and tighten energy efficiency targets for some new ships is a modest but necessary step to combat climate change. Next, IMO will consider energy efficiency measures for existing ships to reduce emissions in the near-term,” Dan Rutherford, marine director at the International Council on Clean Transportation, said in an e-mailed statement.

Faig Abbasov, shipping officer at Transport and Environment, an Brussels-based NGO which has long been calling for stricter EEDI targets on ships, slammed the IMO for showing it is not prepared to adopt rules that encourage technological innovation with EEDI regulation.

“IMO's comfort zone is rather to timidly follow what the market has already  delivered without regulation, and then take credit for it," he said in an e-mailed statement.

MEPC 75 in 2020 will adopt the new EEDI requirements to make them official IMO regulations. Though in theory there is an opportunity for last minute interventions at that sessions, adoption of EEDI phase three rules should be a formality.

MEPC 74 also agreed to form a correspondence group, composed of member states and organisations, to begin negotiating for the first time the fourth phase of the EEDI.