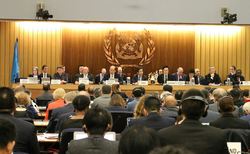 The first day of the Marine Environment Protection Committee in London laid bare yet again differences in ideas about how shipping should decarbonise. The IMO will have to confront and try to reconcile these two attitudes over the next week.

Extinction Rebellion protestors stood peacefully with placards, greeting passersby and handing out cookies to incoming delegates before the start of the meeting, while demanding immediate action against climate change from the IMO and calling for limits on ship speed, a proposal this MEPC will have to discuss and which has divided the industry.

In the main hall, Latin American countries, including Brazil, Argentina and Peru, warned their MEPC colleagues against adopting GHG-reducing measures that may inflict damage on other areas, such as trade, and called for a careful assessment of their impacts on developing states.

That their interventions came as the MEPC had barely kicked off and well before any discussion on GHG emissions had officially opened was a clear indication of the significance of the matter for these developing nations whose trade is overwhelmingly seaborne.

Some of these countries have strongly opposed regulation on speed, citing concerns about the negative effect it would have on trade.

This week, the MEPC must agree on the official process it will follow to assess the impact of each potential GHG-reducing measure it considers adopting in the future

A preliminary round of negotiations last week spent a considerable amount of time on this subject but appears to have left much of the work for the MEPC.

Brazil warned the MEPC plenary that no countries, developed or developing should be left behind and that any new measures can be complied with by member states.

“We must work together to prevent that any new measures by the IMO to reduce GHG emissions create, as an undesired effect, trade distortions,” a delegate form Brazil said.

Peru also reaffirmed its commitment to the IMO initial strategy but cautioned that the effects of any GHG measure must be exhaustively considered in a scientific and comprehensive manner.

Decisions on proposed short-term GHG measures, including speed limits, technical and operational efficiency measures, will almost certainly not be made during this week and discussions will have to resume in 2020 when the next MEPC meets.

But impact assessments on measures will leave a lasting legacy, as they will play a crucial role in if and when measures get adopted; the kind and duration of scrutiny a measure undergoes will play a role in whether it ever becomes official policy.