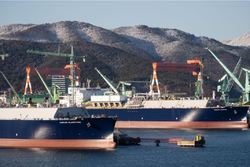 Fewer oil tankers and dry bulk carriers will hit the water, but orders of gas carriers are rising.

Ship orders world-wide have shrunk to the lowest level in 15 years as vessel owners struggle with excess capacity that has kept freight rates well below break-even levels.

There were 3,200 vessels of a combined 81 million gross tons ordered globally in the first quarter, the lowest figure since 2004, marine data provider Clarksons PLC said in a report released Friday.

“The global order book has declined to its lowest level since the early stages of the shipbuilding boom,” George Warner of Clarksons Research said.

Crude tankers and bulkers made up around two thirds of all orders a decade ago, Clarksons said, but this year the share has dropped to 42% as volatility in commodity markets and changes in global energy consumption have triggered shifts in ocean-going trade. Ship types like liquefied natural gas, or LNG, carriers now make up a bigger portion of orders.

The 141 LNG carriers on order represent 13% of the total order book, compared to just 2% a decade ago, Mr. Warner said. The LNG market is surging on growing demand from countries including Japan, China and India, which are turning to gas rather than coal for power generation and heating.

Seaborne LNG cargo markets also are being fueled by growing U.S. gas exports, as extraction costs in the U.S. are about a third less on average than those in other production centers including Russia and the Middle East.

Cruise ship orders also make up a bigger part of the mix, comprising 12% of the global order book, compared with 2% a decade ago, according to Clarksons.

The pullback in orders has hurt shipbuilding yards in big production centers in South Korea, China and Japan, where authorities are looking at closing some operations, consolidating businesses and other strategies to keep the industrial operations running.

LNG ship orders remained strong in the first quarter, with 13 new ships ordered, according to figures from DNB Markets.