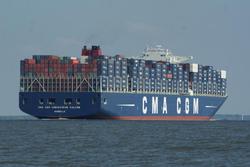 CMA CGM saw volumes and earnings rise faster than the market average in 2018. But increases in bunker costs and exceptional items reduced its bottom line.

“In 2018, in a difficult environment, the group posted a sharp rise in volumes and a record revenue,” said chief executive Rodolphe Saadé. “Despite an increase in oil prices, our recurring ebit [earnings before interest and taxes] margin remains considerably above the industry average.”

He said the line would continue its strategy of “innovation and digital transformation”.

“In 2019, despite persisting geopolitical tensions, trade perspectives are positive,” Mr Saadé said. “We will continue our development with the objective of improving profitability. That is why we are launching a new $1.2bn cost reduction plan.”

The carrier emphasised that its focus was on profitable growth, noting that its 2.6% operational margin was among the best in the industry.

“The price of fuel rose steeply in 2018, an increase of 33%, strongly impacting our core ebit,” CMA CGM said in a statement. “Following an exceptional year in 2017, this core ebit is $610m, representing a core ebit margin of 2.6%. In the fourth quarter, this margin reached 3.1%.”

While no details of the line’s cost-cutting plans were announced, they are understood to include the optimisation of unprofitable trades and a rationalisation of services, with a possible reduction of brands on the same trades.