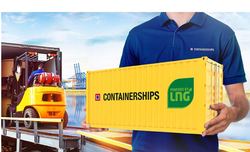 Revenue is still projected to grow 10% but earnings will be lower than the year before, deviating from earlier predictions as the shortsea operator saw margins hit by lower-than-expected profitability and higher costs.

SHORTSEA line Containerships has cut its profit estimate for 2018, saying in an updated guidance that the figure will “reduce from the 2017 comparable level”.

Total revenue forecasts however remain valid, the company said, with turnover expected to rise by more than 10%.

The intra-European specialist, which saw its acquisition by CMA CGM completed last year, added that the new liquefied natural gas vessels are expected to bring significant new business and profitability in the second half of 2019 when they are fully operational.

Containerships has four LNG-powered 1,400 teu container vessels on order with one delivered so far and the remaining three scheduled to be delivered during the first half of 2019.