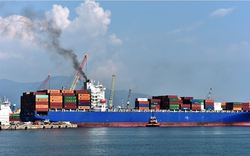 NEW International Maritime Organization fuel regulations that cap the sulphur content in fuel used by container shipping lines globally from the start of next year could prompt a fresh wave of carrier consolidation as rising costs force some regional carriers out of business, according to DHL Global Forwarding head of ocean freight Dominique von Orelli.

From January 1, 2020, new IMO regulations will restrict commercial vessels from burning bunker fuel with a sulphur content of 0.5%. With low-sulphur fuels significantly more expensive, supply chain costs are set to soar, with liner executives estimating the economic hit to the industry at around $10bn.

“The major international shipping companies will be faced with considerable cost increases that they, however, should be able to manage,” Mr Von Orelli told Lloyd’s List. “This trend could become more critical for smaller local shipping companies, however. We have to expect that the new requirements could drive a number of niche suppliers out of the market.”

“It is not unrealistic that the consolidation of the market could continue, but not necessarily — or exclusively — due to the new regulation,” he said. “Some shipping companies’ economic situation certainly remains fragile, even irrespective of the new regulation.”

DHL is supportive of the new regulations and their aim of cutting shipping emissions, but the forwarder would like container shipping lines to do more in terms of clearly and transparently explaining how they will charge customers for higher costs.

“It is probable that the shipping companies will not assume the additional costs and will instead pass them on to customers,” said Mr Von Orelli, who favours floating bunker surcharges.

“The greater the distance, the greater the surcharge could sometimes be,” he added. “This isn’t really foreseeable at the moment, however.

“So far, all discussions are based on estimates. At DHL Global Forwarding, we feel we have a duty to proactively and transparently inform our customers so that they will know as soon as possible what to expect. In conclusion, however, it can be stated that the cost trend will be clearly tangible in the market. This should not be underestimated.”