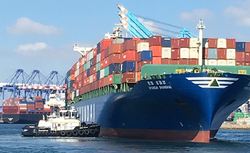 New service offerings and the introduction of ultra large containership newbuildings into the fleet are pushing up capacity on the Asia-Europe trade. But this could soon lead to downward pressure on rates.

CARRIERS on the Asia-Europe trade face further pressure on rates this year as additional capacity creeps into the trade lane, according to analysts.

Up to 28,000 teu of weekly capacity, representing 10% of current capacity, will be introduced on the Asia-Europe trade from April, as carriers rearrange their networks, data from Alphaliner shows.

This includes 22,000 teu from the Ocean Alliance carriers, which earlier this month announced their Day 3 product, which will see a seventh weekly string added to the route and the upgrade of a third string to 20,000 teu vessels.

The Alliance is also adding around 4,000 teu weekly with the upgrade of the FE5 string from 10,000 teu to 14,000 teu ships, which will be completed in March, Alphaliner said.

“This move will add some 1,500 teu per week to the route for HMM, which has also committed to introduce 12 new ships of 23,000 teu on the Asia-Europe route in the second quarter of 2020,” Alphaliner said.

The 2M alliance of Maersk and Mediterranean Shipping Co will be the only carriers that do not have additional capacity planned in 2019, other than the re-introduction of the AE2/Swan service after a 12-week suspension last year, Alpaliner added.

“2M may not be as willing to withdraw service capacity again this year, as its rivals continue to erode the 2M’s market share on this route,” Alphaliner said.

The additional capacity could have a serious impact on freight rates, however. Alphaliner notes that the Shanghai Containerised Freight Index for spot rates has already started to fall ahead of the Chinese New Year holidays.

“The 10% increase in total weekly capacity could put pressure on the Asia-Europe route as carriers continue to fight for market share, with a key test to come after the Chinese New Year holidays when demand drops due to factory closures in Asia.”