<![endif]--> Next decade will be crucial for shipping's 2050 carbon targets

Next decade will be crucial for shipping's 2050 carbon targets 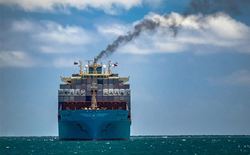 2050 may seem far away but the foundations for long term greenhouse gas emissions reductions in shipping will need to be laid over the next decade, according to a new report from Lloyd's Register and UMAS. The two organisations see three key energy sources that can facilitate zero carbon fuels for shipping.

THE SHIPPING industry needs to aggressively engage with new carbon-cutting ventures and must be supported by concrete energy policies by 2030 to meet and even exceed 2050 emissions targets, according to new research conducted by Lloyd’s Register and the University Maritime Advisory Services.

A new report by the two organisations, which have previously collaborated and argued that zero emissions vessels need to start entering the global fleet around 2030, identifies three energy sources that could propel zero-carbon fuels in shipping; renewable electricity, bio-energy and fossil fuels with carbon capture and storage.

Instead of projecting what is likely to happen based on the current energy landscape, the new report assesses what needs to happen for the shipping industry to decarbonise sufficiently by 2050.

The IMO will revise the targets in 2023 and is currently collecting emissions data from vessels to shed light on the levels of emissions globally.

Major industry players and lobbies have thrown their weight behind the strategy. They have, however, also pressed for the development of new technologies and fuels that can help them meet these targets.

The ten years between 2020 and 2030 will be the most significant and will require innovative solutions and strong governance if the sector is to meet and even exceed the IMO 2050 target, according to the LR-UMAS report.

“There is still uncertainty when choosing one fuel, one technology and one route and therefore this decade will need to see full-scale pilots and prototypes, the development of policy, standards and rules, and will be characterised by first adopters driven by consumer pressure,” the report said.

Batteries in short-sea markets or in hybrid-powered vessels, as well on-shore power supply would also have a significant role, the two institutions added.

“Easy to store zero or  low-carbon fuels (for example sustainable biofuel and methanol) may also be an attractive solution as existing infrastructure and machinery can be used to ease the transition,” the report said.

The state of play would become clearer after 2030 when dominant technologies and financial clarity around these fuels should emerge, according to the report.

“We will start to see ships being designed to store less energy on board and changes to their operating profile to bunker more frequently,” it said.

The path to 2050 could see various stages with different fuel sources dominating at different times, but by 2050 LR and UMAS anticipate an “end fuel mix dominated by one family of fuels”.