China big yet not powerful in shipbuilding, says CSSC researcher 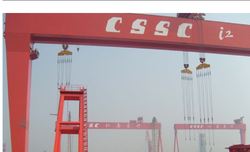 THE Chinese shipbuilding industry may have won the battle over orderbook size, but it remains weak in selling high-end vessels.

That is the view from Bao Zhangjing, deputy head of China Institute of Marine Technology & Economy, a research unit of state conglomerate China State Shipbuilding Corp.

While “upgrading” has been the key word over the past decade for this industry in China in terms of building higher-value, higher-tech ships, the facts do not seem to support the rhetoric, he told a seminar during Inmax China, an event organised by Lloyd's List parent Informa.

Almost all the orders for very large crude carriers and large liquefied natural gas carriers so far this year have been scooped up by South Korean and Japanese yards, especially by the former, according to Clarksons data.

As of end-October, China accounted for over 60% of the global dry bulker orderboook in value terms, but only 22.3% of total large containerships exceeding 8,000 teu and 17.4% of VLCCs.

When it comes to the highly sophisticated gas carriers, Chinese shipbuilders’ market share went further down to 11.2%, compared to 71.6% obtained by South Korean builders.

“The gap between the shipbuilding industries in China and South Korea/Japan has not been reduced much. In some areas, it becomes even larger.,” Mr Bao said. “So China is a big yet not a powerful shipbuilding country.”

China secured the position as the world’s largest shipbuilding nation in 2011, when it overtook Korea and Japan in all of the three main shipbuilding indicators —  namely the size of new contracts, existing orderbook and completed newbuildings — all in dwt terms.

But Chinese yards’ reputation has been stained with the impression that they are competitive on price rather than quality.

To change the situation, Beijing has been providing domestic builders — primarily state-owed majors — with strong financial support, such as easy access to bank loans and the scrap-and-build subsidies.

Accordingly, yards in China have made some inroads in building ultra large containerships and LNG carriers yet remain far behind their major Asian competitors.

One of the main reasons was that the governments in South Korea and Japan have also enacted many supportive shipbuilding policies, according to Mr Bao.

For example, the financial incentives and aids provided by Seoul to Korean shipyards have by no means been inferior to those by Beijing, he pointed out.

For example, South Korea recently unveiled a new package of financial measures potentially worth as much as $1.5bn to support the country’s ailing smaller yards, with plans to order 140 LNG-powered vessels by 2025.

The move came after Japan made a formal complaint against South Korea at the World Trade Organisation, where Tokyo compiled a case alleging that Seoul had handed out $10.5bn in restructuring Daewoo Shipbuilding & Marine Engineering since 2015.

“That shows the Korean government is paying no less attention than us on shipbuilding,” Mr Bao said.

As the competition is expected to stay heated, he further argued that the global shipbuilding markets would continue to face overcapacity problem in the short to medium terms.

The winners would be those who can “create market demand” by being able to build new ships featuring digitalisation, automation and green energy, among other advanced technologies.

“Chinese shipbuilders must be more open-minded and try harder to be innovative,” he added.