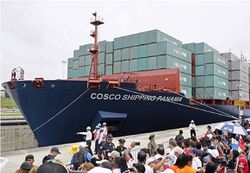 The two countries are looking towards future cooperation after establishing diplomatic ties in 2017.

The US is wary of China’s inroads into the region, especially after El Salvador and the Dominican Republic this year followed Panama’s example in recognizing Beijing’s “one China” policy and ended diplomatic relations with Taiwan

CHINESE President Xi Jinping will make his first state visit to Panama on December 2-3, aiming to further develop relations with the Central American country which established diplomatic ties with China and ended its connections with Taiwan a year ago.

Mr Xi and Panamanian President Juan Carlos Varela are expected to sign about 20 agreements concerning cooperation in a number of areas such as commerce, technology and infrastructure during the visit.

Situated on the Atlantic side of the Panama Canal, the ZLC is a leading free-trade zone. Established in 1948, the ZLC is allowed absolute freedom in the movement of goods, with no duties on imports or exports. In 2017, the value of ZLC exports stood at $10.4bn.

The Chinese visit will come after a key meeting between Mr Xi and US President Donald Trump at the G20 summit on Nov 30-Dec 1 in Buenos Aires as China and the US, currently locked in an escalating tariff war, seek to calm tensions that have spilled over from their contest for geopolitical influence.

The US is wary of China’s inroads into the Central American region, especially after El Salvador and the Dominican Republic this year followed Panama’s example in recognizing Beijing’s “one China” policy and ended diplomatic relations with Taiwan.

As a result of this perceived diplomatic setback, the US State Department recalled US Ambassador to the Dominican Republic Robin Bernstein, US Ambassador to El Salvador Jean Manes and US Charge d’Affaires in Panama Roxanne Cabral “for consultations related to recent decisions to no longer recognize Taiwan”.

The State Department said the diplomats would meet with US government leaders “to discuss ways in which the United States can support strong, independent, democratic institutions and economies throughout Central America and the Caribbean.”

Located in Central America, with borders adjoining Costa Rica and Colombia, Panama is crucial to the regional and global economy, primarily due to the recently widened Panama Canal, bisecting the country to link the major trade lanes of the Pacific and Atlantic Oceans.

"The Panama Canal continues to exceed our expectations, reinforcing every day the importance of the waterway's expansion and its impact on global maritime trade," Panama Canal administrator Jorge Quijano said in October when announcing record-breaking figures.

Mr Xi’s visit to Panama has already provoked high-level push-back from the United States, including recent jibes against China’s “predatory economic activity” by US Secretary of State Mike Pompeo on a visit with President Varela in mid-October.

After the meeting, Mr Pompeo spoke with local media, expressing concerns that Panama could become a beachhead for growing Chinese economic influence in the Western Hemisphere and urging Panamanians to exert caution when considering business ties with China.

Mr Pompeo said he intended to tell the entire region that “when China comes calling, it’s not always to the good of your citizens,” and that countries had to watch out for Chinese companies that “show up with deals that seem too good to be true.”

Following his meeting with the Panamanian president, Mr Pompeo said the US had no concerns about Chinese economic competition.

“We welcome that,” he said. “It’s when state-owned enterprises show up in a way that is clearly not transparent, clearly not market-driven and designed not to benefit the people of Panama, but rather to benefit the Chinese government.”

“Those are the kind of things we think are both inappropriate and not good for the people of Panama or any other country where China is engaged in this kind of predatory economic activity,” Mr Pompeo said.