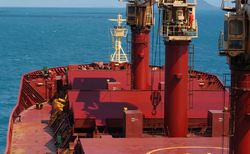 Sentiment appears to have turned negative in the dry bulk market because of a culmination of factors including concerns about China’s import demand. The question is: can the markets regain strength?

While the capesize sector has been the hardest hit during this downturn, panamax vessels generated the most.

INFRASTRUCTURE INVESTMENT IN THE DRY BULK MARKET FELL BY 1.5% IN THE FIRST NINE MONTHS OF THE YEAR COMPARED WITH A YEAR EARLIER, ACCORDING TO MORGAN STANLEY

SEVERAL factors have culminated in weakness setting into the dry bulk market, according to Morgan Stanley.

It cites the emergence of Chinese demand concerns, a rising US dollar, high port inventories, and an iron ore train derailment at BHP’s mine in Western Australia which has led to the “accumulation of vessels at major ports” forcing owners to lower offers, as reasons for the recent slump in rates.

The weakness in earnings power even led to a 20% slump in shipping stocks compared with two months earlier, according to a note by the bank.

“The unusually early rate weakness of the past few weeks, coupled with the drop in Chinese steel prices... has raised concerns over the underlying demand of the dry bulk market,” it said.

“As we are heading into 2019, the market has turned increasingly concerned on Chinese commodity demand, particularly as infrastructure investment was down 1.5%” in the first nine months compared with a year earlier and property has begun to slow down since the third quarter of the year, it added.

Although the panamax segment fell from the year’s high of $14,385 on October 17, it is leading the pack in terms of absolute earnings, with the average weighted time charter assessed at $11,497 per day on the Baltic Exchange at the close on Monday.

The supramax sector started a decline on October 12 after reaching the year’s high of $13,431 per day, and is now at $10,987 per day, according to the Baltic Exchange.

The handysize segment started to slide at the end of October and was quoted at $9,323 per day on the exchange.

The Forward Freight Agreement market also took a battering, with capesize seen at $13,000 per day for December, falling to $11,850 per day for January, according to brokers GFI on Friday.

Consultancy Maritime Strategies International was however more positive on near-term iron ore demand based on better-than-expected steel output in China.

MSI expects China’s traditional winter cuts to reduce pollution to be less severe this year, while iron ore throughput will soon start after the train derailment in Australia. The event was only temporary.

But seasonal factors will drive ore trade lower in the first quarter of next year, it said in a note, adding that slower trade out of the US for soyabeans during the next three months will also be a bearish factor.

That will combine with an expected rise in fleet growth, as 45m dwt is scheduled to be delivered next year, compared with 35m dwt that is due to enter the fleet in 2018, according to MSI.