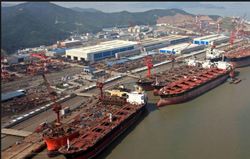 Bulkers have been ordered on the back of bareboat charters to Shangdong Shipping Corp.

A SWS official said the newbuilding contract was signed last week and that the 180,000-dwt Tier III compliant vessels are earmarked to ship coal for German electricity power house RWE.

SWS did not disclose the price-tag of the scrubber-fitted newbuildings.

But shipbuilding players suggest they would cost between $52m and $55m apiece “depending on which type of scrubber will be installed on the bulk carriers”.

In September, TradeWinds reported that Shandong Shipping was looking at ordering up to 14 capesize bulker newbuildings at Chinese shipyards – up to 10 at SWS and four at Qingdao Beihai Shipbuilding Heavy Industry.

According to Chinese reports, RWE has chartered the 10 newbuildings from Shandong under long-term basis.

Total amount of coal that the vessels will be transporting is 150m-tons.

SWS is slated to deliver the capesize bulker newbuildings from 2020.