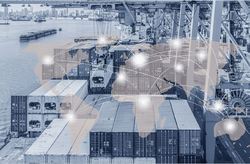 Maersk Line, CMA CGM, Hapag-Lloyd, Mediterranean Shipping Co and Ocean Network Express converge to form a new carrier association that aims to bring an industry standard to core IT practices. The non-profit body aims to be up and running by early next year.

The carrier association is inviting other lines to join the initiative, which will be openly available and free of charge to all stakeholders

The new body is being set up by Maersk Line, CMA CGM, Hapag-Lloyd, Mediterranean Shipping Co and Ocean Network Express.

They say the association will look to pave the way for digitalisation, standardisation and interoperability.

“Whilst the shipping industry already has multiple organisations and associations, the members of the group identified a need for a neutral and non-profit body for ocean carriers that is driven by delivering benefits for the industry and its stakeholders,” the founders said in a joint statement.

Other lines will be invited to join the association once it is operational early in the new year.

The founding members are confident that all the major carriers will sign up to the initiative.

Information technology executives from each of the five carriers are currently discussing the proposed standards that will be openly available and free of charge to all industry stakeholders.

Group spokesperson  André Simha said that the timing of the directive was right, as emerging technologies created new customer-friendly opportunities.

“Together, we gain traction in delivering technological breakthroughs and services to our customers compared to working in our own closed silos,” said Mr Simha, who is chief information officer at MSC.

The association does not intend to develop or operate a digital platform as part of the group. Commercial and operational matters will not be discussed.

“We are looking purely at how we can standardise and harmonise message exchanges between carriers, customers and third parties,” Mr Simha told Lloyd’s List.

Such exchanges will be vital if separate digitalisation initiatives being undertaken will prove successful, he said.

For example, in the case of blockchain, whether Maersk’s partnership with IBM or the Global Shipping Business Network alongside logistics software vendor CargoSmart, it will only work if information is shared in a uniform fashion, explained Mr Simha.

“This is where we would fit in. Carriers can build their own software but we would be able to provide some underlying standards and governance,” he said.

The carrier association was being announced after a survey of more than 200 senior shipping and technology executives by INTTRA, operator of the world’s largest container freight network, revealed that 91% considered the creation of agreed data standards between carriers as essential

The new five-carrier association is subject to regulatory approval.