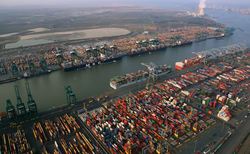 Analyst fears for the fate of the spot market unless carriers move to withdraw significant ship capacity in the coming weeks, particularly if demand fails to impress. But with carriers fearful of not utilising their most expensive ULCs, spot rates could come under increasing pressure.

Addressing the supply/demand imbalance on the Asia-Europe trade will prove even more vital in the coming weeks as contract negotiations get underway, according to Drewry.

ASIA-Europe carriers have turned to void sailings to prop up ship utilisation during low demand months, but capacity cuts must go deeper to avoid downward rate pressure over the winter slack season, according to Drewry.

The London-based analyst says 2M’s decision to suspend the 19,000 teu-deployed AE2/Swan loop in particular has helped lift load factors on the Asia-northern Europe trade over the past month.

“However, even with the suspension of one of the trade’s largest services… this hasn’t fed into higher rates,” says Drewry, highlighting the $400 slump of its World Container Index Shanghai-Rotterdam benchmark since August.

Asia-Europe rates are still sitting at less than 70% of their 2018 peak, despite a slight improvement in the past week

After a brief hiatus the service is due to return to the route in early December. This will return a significant chunk of capacity back to a growth-starved market and will inevitably invite questions on the impact this will have on freight rates, according to Drewry.

The analysts adds that history suggests that carriers will not withdraw the capacity needed to rebalance the market “for fear of not utilising their most expensive ultra large containership assets”.

“In which case spot rates will continue to be under pressure,” Drewry emphasises.

The fate of the spot market over the coming weeks is even more vital considering that negotiations over new annual contract rates for 2019 are underway.

“A big drop in spot rates now would weaken carriers’ hands and make it far harder to secure any improvement over the previous terms,” says Drewry.

If demand continues to leave much to be desired, as it has throughout 2018, further void sailings will be expected as carriers look to narrow the supply-demand gap.

Given how void sailings have had little impact on rates for much of the year, however, Drewry even questions whether capacity tinkering is indeed the answer.

“Alternatively, the tactic still has value it is just a case that lines simply weren’t bold enough and should have withdrawn more voyages.”