US soya bean exports to China are down by 97% 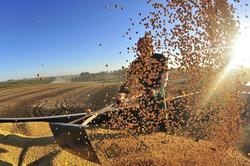 The trade war and particularly the Chinese tariffs on imports of US soya beans can now clearly be seen with the start of the soya bean peak exporting period in the US. 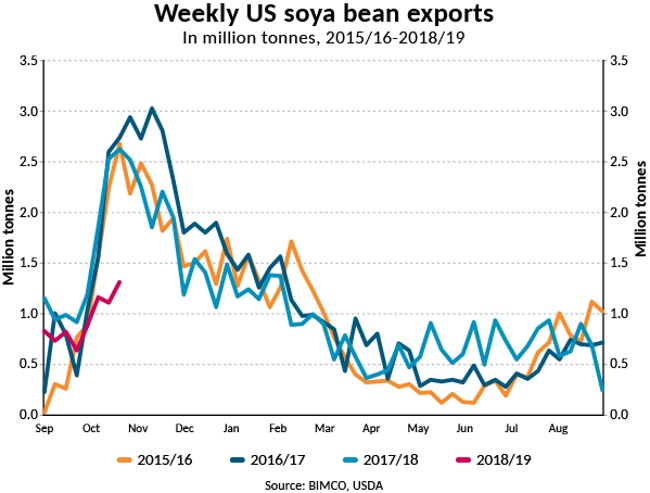 In addition to the fall in total exports harming the shipping industry, an increasing proportion of the demand comes from destinations closer to the US, further lowering the overall tonne-mile demand.” BIMCO’s Chief Shipping Analyst says.
While in the first eight weeks of last marketing year China accounted for 70% of total US soya bean exports, the trade war has led to the Chinese taking just 4% of exports this marketing year. The US has seen a 97% decrease in the amount of soya beans it sends to China, from 8.5 million tonnes in the first eight weeks of last season, to just 201,700 tonnes in the same period this year.
“The driving force behind the lower exports is the drop in Chinese demand. In the first eight weeks of last year, exports of US soya beans to China averaged a million tonnes a week. This year soya beans have only been sent to China in three of the eight weeks.” Peter Sand says.
Mexico is now largest importer
So far this season the biggest importer of US soya beans has been Mexico at 785,400 tonnes, an increase of 34% compared to last year. Unlike Mexico the rest of the top four importers of US soya beans this season have at least doubled their imports. Spain comes in second at 602,800 tonnes, a 153% increase compared to last year. Argentina is up to 508,100 tonnes having not imported any US soya beans at this time last season. Egypt takes the final top four spot, going from no imports in the first eight weeks last season to 486,700 tonnes this year.
Iran was number buyer in August
Iran was the top imported of US soya beans in August, and has so far in the 2018/19 season, which started in September, been the sixth biggest importer of US soya beans, importing 400,400 tonnes, up from nothing in the same period last year.
0
Tags: soya export china US 2018
Visit Home
Send to friends
Print
Newsletter
Share this news