<![endif]--> Winners and Losers From a Sea Change in Oil

Winners and Losers From a Sea Change in Oil 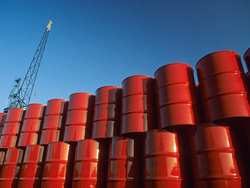 Despite efforts by the Trump administration to turn it, a supertanker is bearing down on drivers, oil majors, and even Amazon.com Inc.

We are 14 months away from a shake-up in the global oil market lacking the drama of, say, Iranian sanctions. It involves a UN-mandated crackdown on air pollution from ships. Still awake? Good, because this could mean some serious disruption.
Ships consume about 3.8 million barrels a day of fuel oil — heavy, lower-value stuff from the refining process that contains about 1 to 3.5 percent sulfur, according to Wood Mackenzie, a consultancy. From January 2020, new rules from the International Maritime Organization will limit sulfur-dioxide emissions from ships. All else equal, a ship would need to burn fuel with only 0.5 percent sulfur content or less to comply.
There are other ways to deal with the regulations. One is to install “scrubbers,” which effectively wash the nasties into the sea rather than let them spew into the air. Those are expensive, however. Speaking on an earnings call last week, the CEO of Wartsila Oyj, a Finnish company that’s big in the scrubbers game, indicated only a tiny fraction of vessels will likely have installed them by 2020. Another option is running on liquefied natural gas, but that only makes sense for new ships, not retrofits. Sailing more slowly, which is more fuel efficient, can also work up to a point. Or ship-owners can just chance it and not comply.
Most, however, will have to switch from high-sulfur fuel oil to a lower-sulfur diesel or gasoil. How big that swap will be is the big question; estimates I’ve seen range roughly from 1.5 to 2.5 million barrels a day. In a 28 million-barrels-a-day diesel market, that may not seem like much. But here’s a chart of demand growth for diesel over the years: 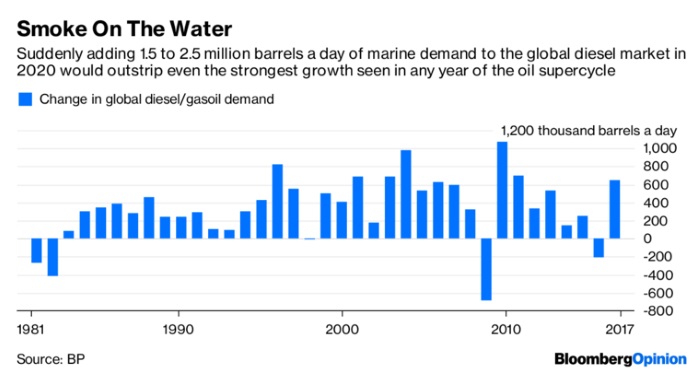 While fuel-oil prices would tank, the price of low-sulfur diesel would, all else equal, jump. That’s a problem for truckers — like the ones ferrying Amazon’s goodies around — for whom fuel has fluctuated between roughly 20 to 40 percent of the cost-per-mile over the past decade.
This explains why President Trump, who has been antsy about gasoline prices ahead of midterms, might want to slow the IMO’s roll in 2020 (when there happens to be another somewhat important U.S. election). However, since the U.S. effectively agreed to the rules a decade ago via an act of Congress, delaying or thwarting them isn’t a simple process.
And the IMO 2020 rules are a potential winner for an important segment of the U.S. energy industry. “A need for cleaner fuel is generally good for refiners,” says Alan Gelder, who runs refining and marketing research for Wood Mackenzie.
U.S. refineries are especially well-positioned. They are, on average, the most sophisticated, or “complex,” in the world, able to extract a higher proportion of lighter, low-sulfur fuels from each barrel of crude oil. Importantly, more-sophisticated refineries can do this even using heavier, higher-sulfur, or “sour,” crude oil. So while more basic refineries will bid up the price of lighter, sweeter barrels to meet the demand generated by the rule change, their more advanced competitors can tap the cheaper, sourer stuff. 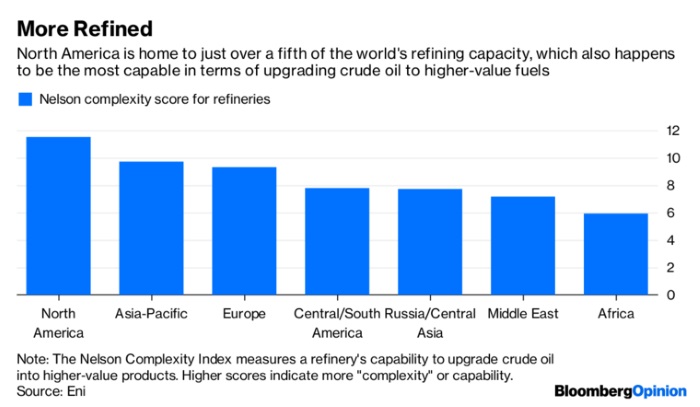 At a company level, U.S. integrated majors and refiners tend to sit toward the top of the scale: 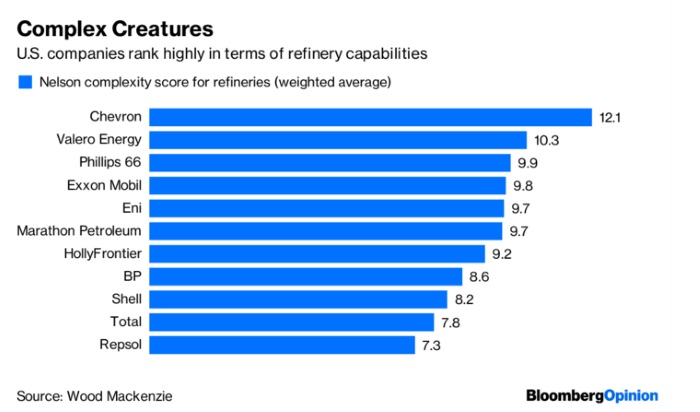 Complexity scores don’t tell the whole story. European refiners, especially Total SA of France and Spain’s Repsol SA, already produce a disproportionately high yield of distillate from each barrel of crude, meaning they should also benefit.
While U.S. refiners don’t score highly on this ranking, that’s only because they are geared toward producing more gasoline for the local market. It’s worth bearing in mind that their yield of fuel oil — effectively in the IMO’s cross-hairs — is typically less than 5 percent of the barrel, while the integrated majors tend to yield more like 5-10 percent. 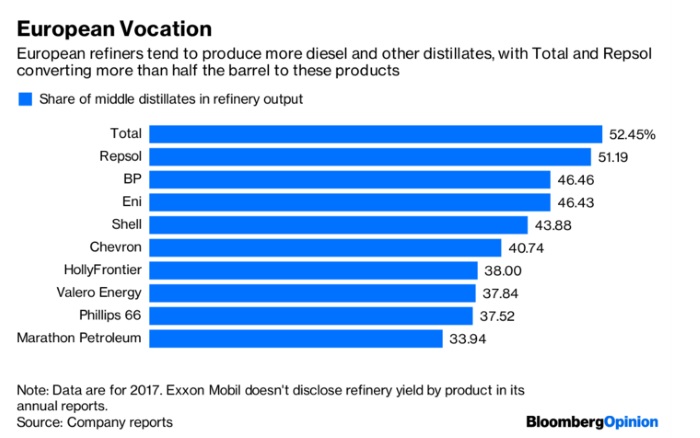 There will also be relative winners and losers among those further upstream producing crude oil. Those producing heavier, sourer grades could suffer pricing pressure as refiners target lighter, sweeter alternatives.
Canadian producers that don’t upgrade their oil-sands output or lack adequate refining capacity of their own, such as Pengrowth Energy Corp., have the highest potential exposure as price-takers, while more integrated firms such as Suncor Energy Corp. look more resilient. Russian majors also look exposed, as my colleagues in Bloomberg News reported Monday.
In general, a sweeter slate of crude should provide more opportunities to capitalize on shifts in demand. The chart below (courtesy of data provided by Rystad Energy, a consultancy and research firm) shows projections for estimated sweet crude-oil output in 2020 for a selection of large, listed companies in North America and Europe, both as a share of operated production and in absolute terms. 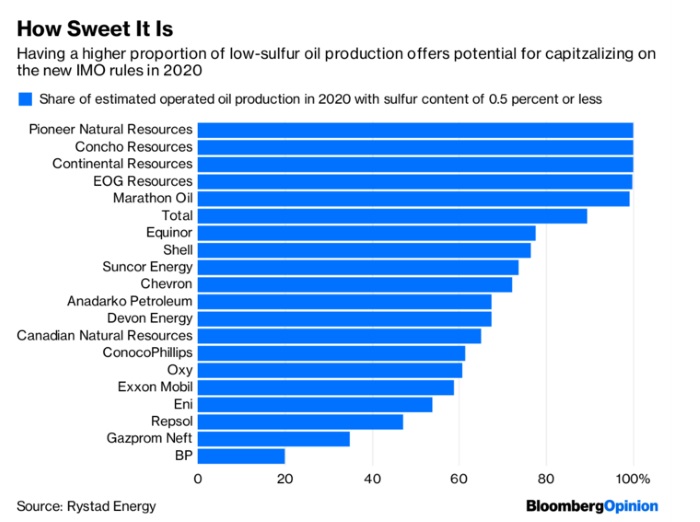 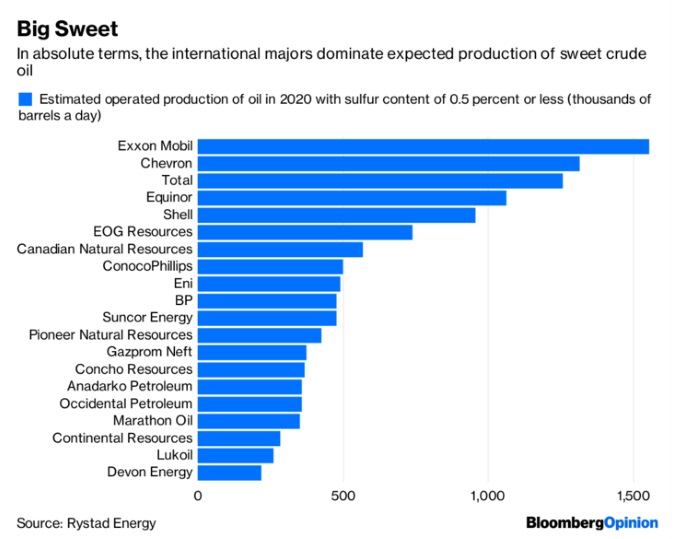 Even as potential winners and losers from the IMO rules emerge, however, there’s a broader impact to consider, extending far beyond just refiners and producers of oil.
Sudden shifts in demand for oil, even a relatively marginal amount like a couple of million barrels a day, can move the entire market. If there is a scramble for low-sulfur fuel by shipowners, and supply is tight, then prices could spike. That’s great for refiners able to capitalize on it. But it isn’t for the ships and trucks that run on it.
And a scramble by refiners for sweeter crude-oil grades could drag those prices up too. Even if margins on other refined products such as fuel oil and gasoline drop, the net effect could be a hefty increase in the price of fuels across the board. Phil Verleger, an energy economist, warned of this prior to the spike in 2008, identifying tightening regulations on diesel emissions as contributing to the squeeze in the oil market. He warns of similar risks today.
Higher prices will ultimately spur necessary shifts in the refining and shipping industries. In the short term, however, adjusting to sudden oil-price increases usually involves the blunter response of using less of it. Global trade, already suffering the effects of Sino-U.S. rivalry, may soon have an oil problem, too.
0
Visit Home
Send to friends
Print
Newsletter
Share this news