<![endif]--> Newbuilding Ordering Picks Up as Shipowners Are Turning to the Tanker Segment Once More

Over the past few days, there has been a resurgence of tanker ordering activity.

In its latest weekly note, shipbroker Allied Shipbroking said that it was “a fairly interesting week overall for the newbuilding market, given the firm flow of fresh orders coming to light the past couple of days. Despite how bizarre it may seem, the tanker sector has taken the lead as of late, to push activity further, with Singaporean investors seemingly being very keen for fresh projects at this point. On the dry bulk side things seem to be in regression for yet another week, despite the good sentiment in terms of earnings that the market is currently under. With the exception of the Ultramax segment, which experienced a considerable increase in its orderbook, given the massive order for 4 firm with options for another 4 units from ICBC Leasing, fresh interest for all other segments seems rather sparse. Notwithstanding this, given that we are still at an early stage of the 4th and final quarter of the year, a quarter typically showing a fair splurge in new orders, we may well anticipate a strong newbuilding activity to take place in the short-run at least”. 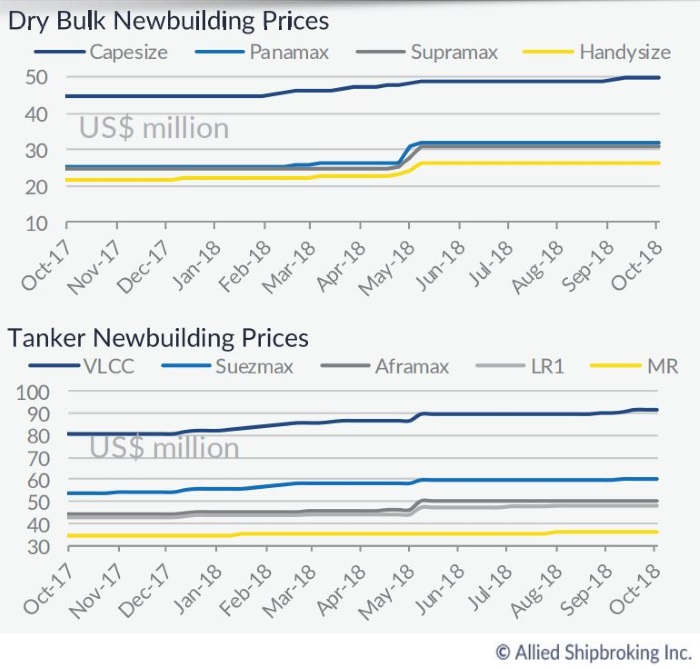 In a separate newbuilding note, Clarkson Platou Hellas said that “whilst contracts were signed last month, it’s come to light this week that Gefo have added to their orderbook at AVIC Dingheng with two 7,500dwt stainless tankers with Ice 1A. Delivery is understood to be within end 2020. Kouan also announced that Stenersen have signed contracts for two further 17,500dwt coated IMO2 tankers taking their orders at the yard to four units – delivery of the latest two is due in 2020. Stenersen have taken delivery of the first vessel in this series with a second unit to deliver soon. It was announced that CIMC Raffles finalised contracts for two firm plus two option 2,700lm RoRos with Bohai Ferry – with delivery of both firm vessels due in 2020. Huangpu Wenchong took an order for a single circa 180m LOA train ferries for CG Railway Inc (USA). The contract was signed in the summer and now become effective – delivery is due in 2020”. Meanwhile, in the S&P market, Allied said that “on the dry side, the long anticipated boost in activity finally took shape this past week, with numerous transactions coming to light. With buying interest varying across all main segments and all different age groups, it seems as though good sentiment amongst buyers is in abundance now. Moreover, with more than 2 months to go before the closing of the year, we can anticipate things to heat up further, while at the same, many will keep a closely eye as to how asset prices start to react. On the tanker side, things seemed considerably more active this past week as well. It seems as though the recent improvement in the freight market has further enticed buyers to act though still not at to aggressive price levels. Notwithstanding this, given that current asset price levels may seem very attractive, on the back of further improvements being heralded in terms of fundamentals, we may well interest rise further over the next couple of months”.