<![endif]--> The Fuel Challenge in Shipping

The Fuel Challenge in Shipping 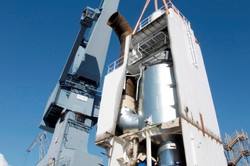 Choosing the most effective, sustainable and aconomically feasible strategy to comply with the new emission limits is not an easy task. The decision must be based in part on assumptions that may or may not prove to have merit. TANKER UPDATE summarizes the options and prospects.