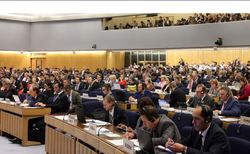 After April’s historic decision to at least halve shipping emissions by 2050, the IMO agreed on Monday the way in which it will develop emissions-cutting measures until 2023. Regulators will separate potential measures into three different groups and work on them concurrently.

THE MARINE ENVIRONMENT PROTECTION COMMITTEE IS MEETING IN LONDON THIS WEEK.

THE International Maritime Organization has approved a strategy to develop greenhouse gas emission reduction measures until 2023.

During a meeting on Monday, the IMO’s environmental authority, the Marine Environment Protection Committee, agreed to use a template that regulators will use to craft GHG-reducing measures over the next five years.

The approved plan was drawn up last week by an IMO working group on emissions.

The MEPC decision follows the adoption of an initial GHG strategy in April, when the IMO agreed to reduce international shipping’s total annual GHG emissions by at least 50% by 2050 and improve carbon efficiency by 40% by 2030 and aim for 70% by 2050.

The IMO will replace this initial strategy with a new one in 2023.

The working group struck a compromise on the timeline of the measures. There was some disagreement among delegates about whether to include an explicit reference to develop measures to reduce GHG emissions “before 2023”.

The ultimate text does not have the explicit “before 2023” reference, but refers to a part of the initial strategy that said the IMO should prioritise existing tools and develop short-term measures “with a view to achieving further reduction of GHG emissions from international shipping before 2023”.

The MEPC also agreed to convene another intersessional working group on GHG before it meets in May 2019.