<![endif]--> Transpacific rates driven by capacity cuts rather than demand

Transpacific rates driven by capacity cuts rather than demand 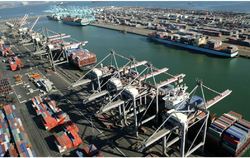 Spot rates on the Asia-US trade are reaching near-record levels as the peak season comes to an end. But port throughput figures show volumes have not been significantly higher than usual.

Little evidence of cargo front-loading on transpacific ahead of tariff rises, but fourth quarter could still give room for growth.

BOOMING freight rates on the transpacific trade are being driven by carrier capacity management rather than any pre-tariff front loading of additional cargo, according to a new analysis from SeaIntelligence.

Loaded imports grew at an even smaller rate, rising by just 1.7%.

“This only serves to reaffirm our belief that the 2018 peak on the transpacific was supply driven and not driven by a tariff-related volume surge,” SeaIntelligence said.

But strict capacity management by carriers meant that the peak season was considerably stronger than the 2010-2017 average, it added.

“The strong transpacific peak seems to be purely supply driven, as not only have the carriers blanked a historically high number of sailings on the transpacific, the first round of tariffs in June did not result in any significant increase in volumes, nor did the August expansion of the tariffs to include $200bn worth of imports lead to any noticeable increase in demand,” SeaIntelligence said.

“Importantly, we are seeing the spot rates continue to increase even as the peak season comes to a close.”

Nevertheless, the tariffs may yet force shippers to change their sourcing patterns, it added.

US west coast peak season were 40%-60% stronger than an average peak and have recently jumped again to almost 100% above the pre-peak season rates.

“It is important to note that strength in this context is the ability to raise rates compared to the pre-peak level, and not the absolute magnitude of the actual freight rates themselves,” SeaIntelligence said.

“The actual rates have been fairly average for most of the peak season, although they have increased again lately on Asia-US west coast, and are now just $246 per feu from the all-time high of $2,833 per feu.”