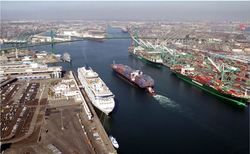 Earlier concerns over the impact of tariffs not borne out by the numbers as shippers built up inventories and supplies ahead of additional cost impacts from further trade tax rises.

POLA sees strong September, and is on track to handle its second-highest annual number of imported containers on record by year-end.

The port’s “robust” numbers are a reflection “of the confidence cargo owners have in our efficiency, regional warehousing options, and speed-to-market capabilities,” Mr Seroka said.

Earlier, Mr Seroka had expressed concern over the potential impacts of tariffs on throughput at the port.

Although overall volumes may have slipped, POLA remains on track to have one of its better years in terms of import boxes.

This puts the port on track for the second highest import volume in its history, just a sliver below the 4.72m teu of imports that came through in 2017.

The port nonetheless plans to increase its efficiency, Mr Seroka said. “As we enter the final quarter of 2018, we continue to partner with stakeholders on an array of projects to enhance our infrastructure and operations,” he said.

POLA and neighboring Port of Long Beach have several on-dock rail projects at varying stages of development as part of a wider effort to improve throughput capacity in Southern California.

According to recent statistics, the neighbouring ports jointly handled 16.9m teu in 2017. But that figure is expected to reach 35m teu by 2035, further straining the port complex and the surrounding transport infrastructure.