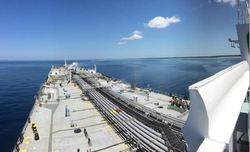 As the summer monsoon ends and ship scrapping season gets back into high gear, the number of large crude tankers that may be sent for recycling could rise significantly, according to VesselsValue. This in turn could lead to higher rates in the months ahead.

The number of vessels with S&P value equal to scrap value is starting to rise again, suggesting more may be recycled soon.

A RECENT rate recovery in large crude tankers may be supported if the current trend of higher numbers of ships on the water at their recycling value continues during the rest of the year.

According to the vessel valuation platform’s figures, the number of VLCCs sent for scrapping peaked at 17 in March and the number of vessels with market values equivalent to scrap values similarly was at its highest level of almost 120 in the same period. The respective figures then dropped to 4 and 90 in July.

The summer monsoon on the Indian sub-continent where the bulk of ship recycling continues to be done typically runs from June to August and the inclement weather puts a damper on activities.

The number of VLCCs sent for recycling went up to 6 in September and the number of vessels with similar S&P prices to that offered by ship recyclers rose back above 100 again.

VesselsValue suggested that this would cause more ships to be sent ashore in the months ahead and this in turn should help support the rate surge being seen in large crude tankers in the third quarter.

While acknowledging the myriad factors affecting a decision to scrap a ship, VesselsValue analyst Court Smith said: “There is one indicator that provides a clear correlation though - the number of ships on the water which are currently equal to their recycling value.”

Noting that these units command as much value in the current sale and purchase environment as a reclamation yard would offer to the owner, Mr Smith added: “It is a clear indicator into the health of the shipping market and is a directional indicator for future removals. Ships which are valued at their recycling price may see asset value appreciation, but the likelihood of upside is limited.”

Adding that although ship recycling peaked at the start of the year in the large crude tanker market of Aframax or larger vessels, it slowed during the summer monsoon. “Current valuation trends suggest there are still many ships on the water which are prime candidates for removal,” Mr Smith said.

He observed that while returns have been moving upwards for VLCCs, the rising momentum is not clear and ton-mile demand growth in September was not as robust as during the second quarter. As such most market participants will be looking at the upcoming fall and winter season to decide on the prospects for their large crude tankers, Mr Smith added.

“The outstanding orderbook for large crude tankers remains high, and significant upside gains for daily earnings will remain dependent on ship removals. This may not happen until spring, but we should see more units removed from service,” he concluded.