ONE and Hapag-Lloyd agree feeder tie-up 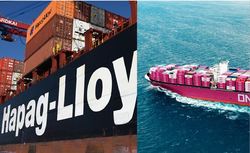 Japanese and German carriers announce partnership on the intra-Asia and intra-Europe trades to share feeder resources, as the pair look to gain a competitive advantage over rivals. The first phase of the collaboration will see the pair share slot space on seven European feeder routes and three in Asia.

ONE and Hapag-Lloyd have begun to pool feeder resources in Asia and will follow this with its combined European services this month, while plans are in place to expand the reach of the partnership.

OCEAN Network Express and Hapag-Lloyd have entered a partnership to pool feeder resources on the intra-Asia and intra-Europe trades.

ONE, which already co-operates with Hapag-Lloyd as part of The Alliance consortia, said that “the collaboration is leveraging the unique strengths and competitive advantages of both companies and aims to provide the market with a superior feeder network”.

It will be expanded into other key areas in “due course”, ONE added.

The initial phase of the collaboration will cover seven feeder routes on the intra-Europe trade — the BAX, NBS, NPX, REX, SDX, ADX and LEX — and a trio of services as part of the pair’s intra-Asia network — BHX, HAS and PID.

The carrier pairing has also already started a new intra-Asia feeder service, known as the Bohai Feeder, or BHX, under the agreement.

BHX launched in August, while a second new offering will follow this month on the intra-Europe as part of the joint venture. The North Sea Poland Express will begin service from mid-October.

In addition to linking up under their alliance guise, ONE and Hapag-Lloyd also co-operate on the Latin American and Indian subcontinental trades.

“This new co-operation is another strong footnote to the existing bilateral partnership,” said ONE chief executive Jeremy Nixon. “We are convinced that together with Hapag-Lloyd, ONE will continue to enrich our feeder network portfolio and provide more premium feeder service to our respective customers.”