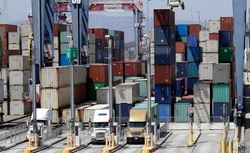 Rush orders from US importers to beat tariff deadlines help boost transpacific demand this year, but could leave a hole in cargo volume next year. APL chief executive Nicolas Sartini says a cut in capacity and a rise in scrapping will help firm up rates.

Drewry warns cargo owners about possible slot uncertainties next year, as it expected the tariff disruption to make carriers cancel more sailings on an ‘irregular basis’

RUSH orders by US importers seeking to avoid tariff increases on Chinese products will have repercussions in 2019, container carriers have been warned.

According to UBS Investment Research, cargo volume on the eastbound routes increased 2.4% year on year in the first seven months of 2018, while the Shanghai Containerised Freight Index to US west coast reached its highest point since 2014.

“We are surprised demand is actually quite so strong,” said UBS analyst Eric Lin during a panel discussion at TPM Asia in Shenzhen. “But what worries the investment community is that the better this year is then the worse it will be next year.”

The sentiment was partially reflected in the falling stock prices of the major shipping lines, he added.

Apart from US’s robust economy, the ahead-of-time delivery of Chinese imports this year to beat the tariff deadlines was another important factor behind the trade growth, the conference was told.

Last month, the US government imposed 10% tariffs on $200bn of Chinese imports and planned to increase the rate to 25% from January. The new tariffs followed 25% levies on $50bn of goods imported from China, which were enforced in July.

Alan Mctaggart, group logistics director of Techtronic Industries, said his company had shipped many of its products to US to avoid the tariff disruptions, and would ship even more by the end of this year.

“When we ship all these in 2018, we will have a hole in our business in 2019 regardless of the optimism of the US consumers.”

Mr Mactaggart books around 65,000 teu of containers annually, of which 50,000 teu are destined for North America. His company makes power tools and equipment mainly in China.

Carriers were also aware of the issue.

APL chief executive Nicolas Sartini said the demand momentum would continue into January next year ahead of the Chinese New Year which starts in early February.

But he conceded that “probably February and March will be a bit slower”.

He told Lloyd’s List that shipping lines were likely to cancel some sailings if cargo volume dropped.

A key upside driver is scrapping which is expected to increase next year, as old tonnage became increasingly uncompetitive amid high bunker prices.

As a result, he was confident that the transpacific contract rates next year would rise.

“We carriers need to recover our costs. Before even talking about the International Maritime Organization’s low-sulphur regulations in 2020, the fuel price has already increased by more than 20% since the beginning of this year.”

This was because carriers had to react to the impact of the Sino-US tariff war, which, if it escalates next year, has the potential to reverse the current transpacific trade growth, he added.

He also warned beneficial cargo owners about possible slot uncertainties next year, as he expected the tariff disruption to lead carriers to make more cancellations of sailings on an “irregular basis”.