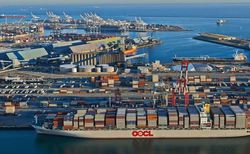 Officials say China-US tariff battle not a deterrent to increased imports and more records are expected to be set in the remaining three months of the year as international trade remains resilient.

POLB has seen container throughput grow by 10.7% this fiscal year, establishing a new high in its 107-year history

The Port of Long Beach broke its own throughput record in fiscal 2018, growing by 10.7% to slightly more than 8m teu, the highest figure in its 107-year history. The fiscal year runs from Oct. 1 to Sept. 30, but more records are expected to fall in the remaining three months to the end of this calendar year.

“We are poised to break our calendar year record at the end of December,” said POLB executive director Mario Cordero, noting that international trade is showing “resilience” despite the current round of tariffs being imposed by Washington and Beijing.

Officials specifically cited "consumer demand" and a "strong US economy" as the key driving forces behind the year's growth in numbers.

Outside observers have also noted that the more recent surge in inbound container traffic can be attributed to shippers trying to get their goods into the US before the imposition of further tariffs.

During the calendar year, POLB figures show an average of 337,813 teu per month of loaded inbound containers. June was clearly the port’s busiest month at 384,095 teu, while March was the least busy at 267,824 teu. There was a difference of 30.3% in throughput between the two months.

Counting empties and loaded outbound containers, June was the port’s overall busiest month of the year with total throughput of 752,188 teu. March, again, was the slowest month, with throughput of 575,258 teu. There was a difference of 23.5% in throughput between the two months.

The growth figures for POLB are ahead of those announced earlier this year by the neighbouring Port of Los Angeles which saw a 5.5% increase in throughput to 9.3m teu, also the highest in its 110-year history.

POLA executive director Gene Seroka called the results “remarkable” and attributed them to “a concerted, multi-year effort by the port and its many partners to maximise efficiency throughout the supply chain.”

Among other changes, POLA last year implemented technology upgrades, including implementation of the Port Optimizer digital information portal which it developed in collaboration with GE Transportation.

POLB commissioners, meanwhile, have recently authorized a budget of nearly $900m for the development of on-dock rail at Pier B, one of several rail developments to be installed with an eye to increasing throughput over the next 20 years.