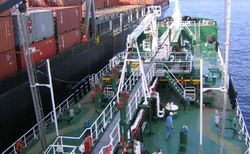 The price of bunker fuel has nearly tripled since 2016, but freight rates are still languishing. Shippers should expect carriers to seek a rise in rates next year to compensate for rising operating costs.

Shippers are warned that freight rates could increase by 13%-20% in 2019 as carriers seek to recoup bunker fuel costs.

SHIPPERS should expect a freight rate increase of between 13% and 20% next year if carriers are to make up for the increasing price of bunker fuel, according to analyst SeaIntel.

While the focus of bunker discussions has been on the introduction of the International Maritime Organization’s sulphur cap in 2020, SeaIntel points out that carriers have been paying increasingly steeper prices for fuel already and that increase has not been reflected in higher freight rates.

Fuel prices have increased from an average of $159 per tonne in February 2016 to $474 per tonne last month, SeaIntel said.

“From the market nadir to August 2018 the oil price has therefore increased by 187% — almost a tripling,” it said. “In the same period, global freight rates have increased a scant 6%, and even if we use the slightly higher rates recorded in July 2018, the freight rate increase remains a modest 8%.”

Using figures from Container Trades Statistics freight rate index, which uses 2008 as 100, SeaIntel pointed out that with the last time fuel costs were this high, the global freight index, which in July stood at 68, was at 82.

“This indicates that current freight rates should — theoretically — be up to 20% higher than what is currently the case,” SeaIntel said. “The word ‘theoretically’ is used as the continuing phase-in of larger vessels lowers the actual fuel consumption per teu, and hence will in itself serve as a dampener on freight rate developments.”

Using Hapag-Lloyd’s published costs for the first half of 2018, SeaIntel found that fuel made up 14% of total costs. But in the first quarter of 2016 this figure was just 7.2%.

“Using this as a benchmark, a 187% increase in fuel costs should therefore only impact 7.2% of the costs, and consequently lead to a 13.5% increase in freight rates,” SeaIntel said.

It was clear that the current freight rates were not reflective of the underlying increase in fuel costs, it added.

“Shippers who are preparing budgets for 2019 should therefore take into account the likelihood of freight rate increases of up to 13%-20% seen from a global average perspective, although the actual increase may be slightly lower due to the dampening effect of the scale,” SeaIntel said.