<![endif]--> The Role of International Waterways in the Global Economy

The Role of International Waterways in the Global Economy 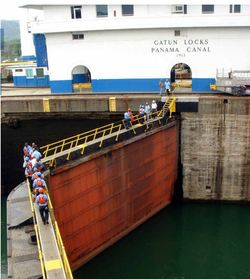 The strategic location is a location where its events have regional, continental or global reflections, and a point that can be used as the center of communication or the concentration of military forces and defense fortifications.

The most important indicators for assessing the strategic location of the sites are: 1. Having a communication position, 2. The possession of valuable natural and economical re - sources, 3. Being next to international waterways or straits, 4. Placing between two or more important areas, 5. Having a military position, 6. Possessing maritime status and access to free waters.

International straits and channels have the potential to affect both the national and foreign policy of the countries, as well as the military and maritime strategies, and allow their coast - al countries to control the trips in them, so they have a strategic value.

International straits and channels have communicational, political, security and economic functions. Their first function is the communicational function and the potential to establish commercial, economic, and military ties and transferring of passengers and goods between two places or on waterway. Straits have been the place to convey the commodities and to carry out economic relations of countries for a long time, thus played a significant role in the development of global trade.

So, their economic function is also defined in this way, which is a major part of growth in world trade is accounted for transferring in them. As the military and security functions of the straits, these waterways play an important role in the transfer of power, logistics, fleets of the countries, and the policies of the countries about them can be a factor for the loss of security and endangering the stability of a region. The political functions of the straits are also related to their communication, economic and geostrategic values.

On the other words, each of these functions has a profound role in influencing national and foreign policy of the Strait coastal countries and can be a powerful tool for relations with other countries and put them in a superior position. Among the international straits and canals in glob, the most important and most influential straits and waterways with strategic, geostrategic and geopolitical roles are the Strait of Hormuz, the Strait of Malacca, the Bab-el-Mandeb Strait and the Suez Canal.

The Strait of Hormuz is a narrow curve shape channel that links the Persian Gulf to the Indian Ocean. This strait is a concavity connected from the north to Iran and from the south to the Al-Musandam peninsula.[18] The length of this Strait is 187 km. Its entry is marked with two ridges: “Rass Dabah” and “Rass Alkouh” on the coast of Iran; the exit of the Strait is the region between the Rass Sheikh Massoud and Hengam Island.

The width of the Strait is at the shortest distance between the Quayen Kabir and Larak Islands, 38 km, and at the longest distance between the two countries’ coast - from the Nakhle Nakhoda on the coast of Iran to the northern point of Al-Musandam, 90 km. Also in the eastern boundary - between Rass Dabah and Rass Alkouh - the width of the Strait is 96 km and in the westward - between the port of Bostaneh and the port of Dubai - it is 150 km.

In terms of depth, the strait floor in the north and south direction is not symmetrical, so that its sharp slope is on the south coast and the smooth slope is on the northern coast. The deepest point is adjacent to the southern coast of the country and the Oman, in which the way of separate transportation plans is located along this coastline. The depth of water from the west to the east increases. The average depth in the west of the Strait and in the Persian Gulf is 25 meters and its deep sections rarely exceed 73 meters.

This strait has been considered a strategic point for South West Asia and the world for a long time. Historical studies show that in different periods before and after Islam and also in the current period, Strait of Hormuz has a strategic importance and was the place of competition of powers to dominate it and in the present time, this role has been preserved and all The countries of the world are aware of its key importance in the economies of the countries.

According to the Lloyd’s List Intelligence, the U.S. Energy Information Administration (EIA) estimated that about 80% of the crude oil was sent to Asian markets through this strait, and the most important destinations of it are China, Japan, India, South Korea and Singapore. In the export of LNG, Qatar exported 3.7 trillion cubic feet through the Strait of Hormuz in 2016. According to the British Petroleum (BP) in 2017, this volume is more than 30% of the global trade of LNG.

In sum, the Strait of Hormuz is the channel of communication between many countries for commercial and economic exchanges, and millions of barrels of oil and its products and also tons of other commodities are exported or imported through it per day, and the economy of many countries in the world, including Europe West, America, East and South-East Asia, and all Gulf states depend on its security and openness.

Strait of Malacca The Malacca Strait is one of the most important strategic paths in the world, supporting a major maritime trade between Europe and Asia-Atlantic, which has the volume of 50,000 ships annually.[6] The Strait covers about 500 miles north to south between Malaysia and the Indonesian Sumatra Island and its water shares with three countries: Malaysia, Singapore and Indonesia.

In fact, the strait is located between Indonesia, Malaysia and Singapore, connecting the Indian Ocean to the South China Sea and the Pacific Ocean. Malacca Strait is the shortest seaway between Persian Gulf oil suppliers and Asian markets, especially China, Japan, and South Korea.

The length of the strait is about 800 km, its width is between 50 - 320 km (2.5 km at the narrowest point) and its minimum depth is 23 meters (about 70 feet). The Malacca is the longest strait of the world in international navigation, and its passage can take about 20 hours.

In total, about 30% of the world’s trade and 80% of Japan, South Korea and Taiwan imports of oil are transferred through the Strait of Malacca.[6] The geographic location of the Strait of Malacca and the statistics of the flow of oil and nonoil products from it, as well as its role in international trade, indicate the importance of this international waterway. If the Strait of Malacca is blocked, nearly half of the fleet will be forced to land around the Indonesian archipelago, including along the Straits of Lombok, between the Bali and Lombok Islands, or through the Straits of Sunda between Java and Sumatra. These are the alternative routes. These alternative routes reduce global transportation capacity and increase transport costs and potentially affect energy prices.