<![endif]--> Is the dry bulk sector upturn close to its peak?

Is the dry bulk sector upturn close to its peak? 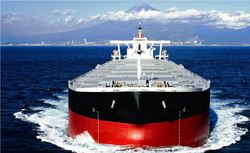 Capesize uptrend is likely to sustain in the fourth quarter of the year owing to booming demand for iron ore. While supply side dynamics look supportive for the next two years, MSI predicts demand is expected to slow on reduced Chinese steel production.

MSI remains positive for the short-term outlook for capesize rates and projects time charter rates to be above $20,000 a day on average for the fourth quarter of this year.

THE short-term prop of booming iron ore volumes is likely to lift the dry bulk sector as a whole, but a longer time horizon suggests a structural slowing of demand, according to Maritime Strategies International’s lead analyst Will Fray.

Although the second quarter of 2018 was a mixed period for bulker earnings — broadly characterised by a recovery in the capesize market coupled with relatively flat rates in the sub-capesize segments — fortunes seems to have diverged further in the third quarter.

MSI, however, remains positive for the short-term outlook for capesize rates, underpinned by robust iron ore trade, particularly from Brazil and expects capesize time charter rates to be above $20,000 a day on average for the fourth quarter of this year.

“The capesize time charter market has strong positive momentum, but the recovery in the sub-capesize segments since the lows of early 2016 has run out of steam in recent months. This situation is unlikely to last long,” Mr Fray said. He took the view that if the capesize market continues to appreciate along the recent trends, then panamax rates are highly likely to follow.

“A direct mechanism for this correlation between capesize and panamax spot rates is cargo stem splitting — when it becomes cheaper for a single capesize cargo to be shipped in two panamax vessels, although this will also limit the upside for capes should smaller vessel classes underperform.”

In general, topical distraction is rarely the major underlying driver of the bulker market outlook, but it is still crucial to understanding market risk.

China’s industrial market dynamics continue to dominate dry bulk demand in the forms of iron ore, coking coal imports and steel product trades, driven by internal investment and supported only at the margin by the Belt and Road Initiative.

The strength of Chinese steel production this year has been remarkable, with 449m tonnes produced by the end of June, up 7.1% from the same period in 2017, making it an all-time high.

However, the impact of falling domestic steel consumption will only partly be offset by demand for cheap Chinese steel exports overseas, underpinned in places by projects linked to the Belt and Road Initiative.

“The overriding message is that, despite current strength, we expect Chinese steel output growth to slow, peak and fall within our five-year horizon,” Mr Fray conceded.

In the light of this weakening outlook for vessel demand, MSI’s supply-side outlook is a source of some relief, but is also a major source of risk.

In each year until 2022, MSI expects supply growth to be less than demand growth but this is underpinned by strong scrapping on the back of new regulations.

“The significant stimulus we are expecting for scrapping from 2019 derives from the Ballast Water Management and the International Maritime Organisation’s 2020 regulations coming into force by the end of the decade,” Mr Fray said.

Scrapping will increase dramatically next year to about 25m dwt and reach a peak at 34m dwt in 2020, he projected.

Mr Fray added: “Despite employment rates still being comparatively low in the context of the last two decades, there is a real risk that we are already fast-approaching the summit of the recent upturn.”